There comes trudging back across the home paddocks of the bay
pushing its way
waist-deep in the trembling seed-heads of the light
the trawler, with flat roof and nets aloft,
with its motor that thumps like an irrigation pump
and a winch triangulate
on the monolithic cloud. And this cloud is straining out the sunrise
of a Bible tract
that shows a few lumps of islands and just the one boat
in the blazing sand-box of the sea,
while close-up the edges of such a volatile kind of grit
are being swept ashore.

It’s all noticed by a cyclist on the wet asphalt, who takes a corner
above the banksia scrub,
by someone in pyjama stripes and venetian slats of light
among the occasional wide bungalows,
by two early walkers going down a track
onto the dunes,
from where they will watch the baggy sea, that is practising its
ju-jitsu on the kelp.

Only the harsh approval of the gulls
that the fishermen are back, the small boat
swimming exhausted with nose up; back
from a night far out on the weird phosphorescent plain, in the seething culture
of the hatching snake eggs, or from deep
in the icy slush
of moonlight; the sea corrosive-smelling
and raw
like rust. Back from the cobra-flaring,
gliding and striking sea, goaded it would seem by their being there,
who tear
up by the roots the nets and the lobster traps.
Back from a sea sweaty with stars, or from one black and flowing like crepe.
From a sea that erupts
and falls on them so hugely that only the radio mast could have shown
in the foam, if they’d had one. The fishermen have been taught,
by each other, that if swept off
in such a sea, without a jacket, which they don’t wear in their work,
to swim straight down and make an end of it,
since they will never get back.
They live inside a dream
out there, everything they know about is in shadows,
who sometimes see a liner,
further off, that goes drifting past them like a town
on the moon,
and who see the ocean vomit a black whale
like its own tongue.

But you have come back, the pair of you, to a morning world
of newspapers and washed cement,
to swollen, damp
milk cartons, and car fumes,
to a train for the city, moving off again through the small town, with a stiff spine,
to the old wooden tenements, with sand hung
in their eyebrows, near the line,
and a sky like bacon.

One of you has a wife, and she is brusque, earth-bound, and unforgiving still.
She loves you, you can tell, by her sullen glances.
Her humid-smelling nightgown, and the smoky
curlicues of hair about her ears, in the streaming light –
‘Don’t empty those boots there!’
‘Mum Mum Mum Mum Mum Mum  !’
‘Why must you always have this bloody soup for your breakfast? Look,
I’m burning it again. Do something:
watch it. No,
that toast is for the children!’

Who can know how strange the land is for you, the place where you come to sleep?
You have watched the single mass of the mountains slowly worked loose,
that goes down aslant into the Underworld, and alone then in the bows have seen  the bear-paws
of the ocean idly claw at you.
You see now, half asleep, the children eating – the grains come undone in their mouths;
you don’t speak, and you watch your hands, you once slapped one
like a wave.
And then you wake,
and all is silent. You stagger, scratching
at your underwear. The little cells of the screendoor,
in the afternoon sun,
are sealed with dust. Those big lemons, breast-tipped,
are new for this young tree, out alone in the concrete yard. On the table
the shopping lies agape
like a mouth of grief – the cans of tomatoes, red molars; the pot-scourer; the foamy bread.
You give up, quite soon, tinkering with the bath heater
and write on the back of a note
a note, with a pen that half works. You walk through the glare
like someone taking a sick day, to the pub, and again you share the dark
waters there; you and they launch out from the Pier Hotel,
travelling together glass by glass.
The school kids come out shrieking in the sun;
such animals, you see, as you have released from your body,
in the hope of a little comfort, a home. What mad delusion was that?
Children were to keep a woman busy
until you got back. In the pub, you stagger before you can walk again on the water.
It is time to go out
with this bastard, your old mate.
You look up at him, where he comes to get you – that face
might have been some woman’s nightmare;
a breath of sour acids,
and never a tender intonation to his voice.
You take your mate’s hand, that is hard as a damp stone,
reached to you on the floor,
in the gutter,
in the sea. Through his broken teeth he tells you
to hold on, you’ll be all right. He pulls you into the boat
or he’ll come out himself.
It can never be said, but you think, Where
have you found a love like this? In the morning you’ll part from him again
with a curt word, at the jetty. You will turn and walk inland
and give life another chance.

Robert Gray was born in 1945 and grew up on the north coast of New South Wales. The coast has provided the setting for many of his poems, upon which is founded his reputation as the pre-eminent landscape poet in Australia.

He has published seven collections of poetry, and his Selected Poems have been published in the UK and Europe as well as Australia. He has won every major poetry prize in the country, and is taught widely in schools and universities. 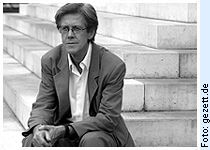 His poetry is characterised by the striking and often unexpected nature of his imagery, his flexible use of the free-verse line, and an attitude drawn from Buddhism, which is determined to capture the particular qualities and textures of the material world, the “thingness” of things.