Here are two pictures from, my father's head —
I have kept them like secrets until now:
First, the Ulster Division at the Somme
Going over the top with 'Fuck the Pope!'
'No Surrender!': a boy about to die,
Screaming 'Give 'em one for the Shankill!'
'Wilder than Gurkhas' were my father's words
Of admiration and bewilderment.
Next comes the London-Scottish padre.
Resettling kilts with his swagger-stick,
With a stylish backhand and a prayer.
Over a landscape of dead buttocks
My father followed him for fifty years.
At last, a belated casualty,
He said - lead traces flaring till they hurt –
'I am dying for King and Country, slowly.
I touched his hand, his thin head I touched.

Now, with military honours of a kind,
With his badges, his medals like rainbows,
His spinning compass, I bury beside him
Three teenage soldiers, bellies full of
Bullets and Irish beer, their flies undone.
A packet of Woodbines I throw in,
A lucifer, the Sacred Heart of Jesus
Paralysed as heavy guns put out
The night-light in a nursery for ever;
Also a bus-conductor's uniform –
He collapsed beside his carpet-slippers
Without a murmur, shot through the head
By a shivering boy who wandered in
Before they could turn the television down
Or tidy away the supper dishes.
To the children, to a bewildered wife,
I think 'Sorry Missus' was what he said. 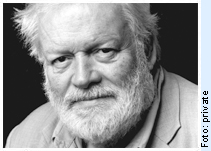