And now,
has it come to this?
We’re right next to each other but so far apart;
two lovebirds transmitted by mere signal,
breaking up.
Into four lovebirds.
Breaking up too, like a sardine run on the make,
with no chance ever of reaching the other shore.

I’m against love, the whole multiplication thing:
the Vatican’s never-ending bakery, as well as the fish shop
next door.

I’m not fooled by your nipples pricking up, you’re just
panel-beating your armour.
The metaphors have become soldiers, the gestures are all stretchers
now and you’re a babushka-doll
of never-ending napoleons, one smaller
than the other.

Strip the peacemakers naked and throw them out the windows –
trussed, hot cross buns first, I don’t care about the middle ground!
Let’s split up. The nice thing about the atom
being divided is you can trust it,
a million times over.

And our sweet words? They’ve soured –
the poisonous petit-fours of a deserted voodoo ritual.
The only good thing about this is to see
how the counsellors in my mind’s eye
and the priests flee,
those black peacocks in their useless sandals.

I’m against sense. I’m against confusion too.
Just the other day they crossed a pig’s egg
with a human sperm. I’m all for it.
Thank you mister girl demons,
missus colonel flying fish,
for raining frogs on the ventriloquist,
for chaining the juggler
to the orchard of suspended oranges.

And the banshees that mounted the Trappist,
one can never trust a nightmare:
now I’m at square one again –
and you stole my Three Monkeys!

Baby Jupiter, Mother Sun,
you were my photostated Pantheon
blown to life by the wind,
but the temple is now torn and aflutter with wings.

What has become of us? Where are the memories?
We are frozen at one another’s throats
like eagles in the coat-of-arms
of an old, extinct family.

It is becoming summer on the highveld, where we both live.
They call this region the Cradle of Humanity,
where the first hominids roamed. Another year is passing.
The skeletons of primordial tigers lie packed up
in the limestone, like virtual grand pianos.
The naked savannah sings. And the lightning flashes
like my computer screen, storing this sentence.
Scurrying stockbrokers of the young republic,
flighting new markets, are crushing the primitive skulls underfoot.
But while everything starts to live again, our love has died.
The grey guinea fowl are coming out of the grass, in their graphite shawls.
These are the peacocks, the down fireworks of long, long ago,
that have dulled on the retinas of two corpses, that are ours.

Love: the hidden categories,
the painted doors on the honey catacombs,
and now this. Damn it. Fuck it. Persecution.

Time: a stone of petrified strawberries;
the picnic basket that got stolen by a baboon
near Sterkfontein Caves,
and the vanished couple.
Yes this. Damn. –

We are sleeping at the bottom of a sea.
Our faces are looking in opposite directions,
two profiles embossed on separate coins.
Our hair that would lift in the breeze of the present
is now minted on the wind of eternity.
We are a lost treasure.
The ship ran aground in foul weather.

But one day, on a clear day in the distant future
two skin divers, a boy and a girl,
two beautiful lovers in the shallow water,
will discover you and me again
with their brand new bodies
and retrieve us

from this forgotten wreck.

Charl-Pierre Naudé is a poet, prose writer and essayist, and lives in Johannesburg, South Africa. He has published three volumes of poetry in Afrikaans, one in English, and a second English volume is underway. His first novel will appear shortly.

Naudé has worked as a journalist, editor, freelance literary critic and book reviewer. He has published in notable magazines in the Netherlands and in South Africa. In Germany some of his latest work has appeared in Schreibheft 84. He has often read at international festivals. In 2014 he lived in Berlin on the Artists-in-Berlin Program of the DAAD. 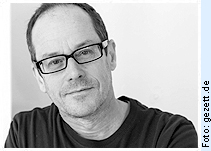 Foto © gezett.de
He has received several prizes for poetry in his home country. His latest volume, Al die lieflike dade (which could be translated as "All the comely actions") has recently been a finalist for two well-known poetry prizes.

He likes to rely on a mixture of imagery and ideas, and mixing up the personal and the social dimensions. Though he comes from a very politically minded society, his poetry refers to this sphere mostly obliquely and in indirect ways. The indirect commentary, which strays from the known route and arrives unexpectedly, covered in barnacles, is what he favours.

He has on occasion said he likes writing about a country that he has dreamed up. This place has strong similarities to a real, geographical place, but it exists entirely separately. And only poetry knows its name.