the bloody seat covers sat in a heap in his room

he was later saved by chance
picked up off the street
had his pockets stuffed full of bills
now, he gratefully bears
fairy-tale state debt for someone else
until his death

dad was always proud of my brother
a man, all the same

Birk Rohelend (Hele-Riin Moon; born April 17, 1981 inViljandi) is better known as a youth writer: her novels for young adults, which address serious and painful topics, have won a number of novel competitions. In addition to three narratives, she has published one longer poem (!) and a poetry collection titled Morbidaarium. Rohelend has studied genetic technology, worked as an aerobics trainer and in statistical analysis, and has lately become widely known as a screenwriter for TV series. 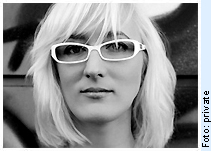