Between Aachen and Zyryanka,
between Samarinda and Samarkanda,
up and down on the prow
on the violet strait
between Kérkyra and Saranda,
on the train between Vladivostok and Moscow
which seven times crosses the dawn,
cutting through, journeying forth,
from a blissful silence as the seagull dives
into the foam of Antofagasta
to a multilingual expletive
as my foot charges into the manhole,
between Baden Baden and Bahrain,
between Fort-de-France and Port of Spain,
cruising at a hundred and thirty
along the three thousand miles
between Portland, Oregon and Portland, Maine,
from the skewers of a Scottish chill stabbing at the cheeks
to the lips drying out in the sand-bearing wind
of Marseille,
sailing on, sailing on
between Zuwarah and Lampedusa
on a boat splitting into two,
with pressing voices,
with smothered throats
searching for the ears of the night.

Between Ceylon and Sri Lanka,
between Kalaallit Nunaat and Greenland,
between a kia ora on an Aotearoa morning
and a g’day in the dragging accent
of New Zealand,
trapped and broke
at the Rwandan customs
with an identity swinging
between offer and demand,
between a déjà vu in a square I’ve never heard of
carpeted in jacaranda petals
and lost in the streets of an illuminated city
I roamed not long ago,
something more worldly
than nostalgia
for an island I’ve never visited
subtly invades me in the hubbub
of the airport,
waiting at the gate
away from her father’s gaze,
a little girl draws new countries
in the empty pages
of his passport,
disarranged, berthed down,
with a thundering stomach,
from the kefir that upset me in the sweat of Madrid
to the soft hands of the Sorbian village girl
who brought me back on my feet with a bowl of soljanka,
between grave and acute, between lukewarm and tepid,
indebted to a past that will not go by
between a week straddling a week and an odd Wednesday,
dazed and deafened in the distressing discourse
between two Gozos and two Maltas,
between the centre and the corners,
between heads and tails,
with the curse of my doubts
for ever and ever,
sprawled out on the fragrant leaves of grass
with the sunlight reflecting on the open book
I swell with pleasure until besieged by the racket
between a lousy dj and a pair of sweethearts,
from the reverberating drill in the towers of Singapore
to the pecking of the chickens on the corrugated roofs
of the kampung,
between a screaming logogram in the China Daily
and a mercilessly snaking sentence
in the Mallorca Zeitung,
I leaf through the pocket dictionary
to decipher the news:
a shredding aeroplane
a shrieking spinning-top
in a storm between Brazil and Senegal,
squashed in the gravitational gullet
rain of scrap and of frozen bodies
onto the crystal sea
of the equator.

Untranslatable I awake
windy and cloudy,
between an ink-soaked map and a prostituted tongue,
the blood sweltering for the open, the liver riddled with holes,
between a hair and a bristle, between the trap and the birdhouse,
from the sun meeting me at the foot of the bed
to the pale white face of my love
with her hands on her womb,
between here and there and beyond and back
between my arse uncovered and my soul concealed
between coming and going and vice versa
between straight to the point and about the bush
between true and not,
between the angels and the ghouls,
between no longer and not yet and the other way round
with the terror of the wind amid the flagstaffs
trying to see how I can snatch that sound that escaped me
I have branches underground and roots that reach the clouds
sprout upon sprout into the vapour and the dust
I have a shoot that descended to the antipodes of the world
I have an antenna that climbed to the mountains of the moon
between departure and arrival, between arrival and departure,
with all windows wide open, with the sky overcast,
with a stranger at the mirror examining
the netting of my cracked face
from the red of the carpet rolled out at our birth
to the ice-white shroud that covers us at the burial
between fra and tra, de-ci, de-là,
ανάμεσα , 之间 , между , zwischen
the perpetual indecision
of a clear preposition
between not in my place and my place within me
between back to my senses and out of my mind
walking with sure feet
from border to border,
from meridian to meridian
of the prisoner world,
between from and towards,
between towards and to,
at the centre of all
and at the edge of nothing,
the legs full of verve, pain in the sides,
I turn, cross the road
and continue on my way,
trying to comprehend
the why
of where.

Antoine Cassar was born on June 22, 1978 in London to Maltese parents. Cassar grew up and studied in England, Malta, Spain, Italy and France.

Beyond his monolingual Maltese poetry, Cassar is the author of Mużajk, a work in progress braiding together the sounds and cadences of different tongues into a fluid rhythm and a coherent stream of thought. Written mainly in a blend of English, French, Italian, Maltese and Spanish (in no particular order), and later sowing in other languages according to the subject, the mużajki or mosaics journey through a variety of themes, among them the pleasure and futility of living, love unrequited or fulfilled, the beauty of the Mediterranean, the absurdity of colonialism and its after-effects, and the at once exhilarating and disorienting feeling of variety itself. 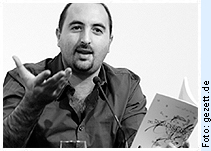 Foto © gezett.de
The first series of Cassar's “mosaics” appeared, together with a number of poems in Maltese, in the anthology Ħbula stirati (Tightropes) in 2007. A handful of mosaics have also appeared in publications in Italy, Spain, Denmark, Kuwait, Australia, and the U.S. Cassar has taken part in a number of European poetry festivals, including the Københavns Poesifestival, the Festival de Poesía de la Mediterrània of Palma de Mallorca, and the Poesiefestival Berlin.

Antoine Cassar lives in Luxembourg, where he works as a translator.