the stairs died of thirst
the ground fell into never

you can take back the days you brought

Pedro Sena-Lino (born 1977, Portugal) studied Portuguese Language and Literature in Lisbon and completed his studies with a dissertation on José Régio. He teaches Creative Writing and has written two books on the subject. He was also a literary critic for the Portuguese daily newspaper "Publico" until 2007. Since October 2007 he has been a research fellow in a research project on Portuguese women writers.
To many, Sena-Lino is the voice of the new generation of Portuguese writers. He has published seven collections of poetry. His poems have appeared in Anthologies in Portugal, Brazil, Spain, Croatia, Bulgaria and France.
As well as poetry, he published a volume of short stories, "Museu de História Sobrenatural", in 2007. His first novel was published in 2009. 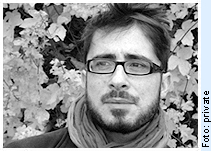