In the village nestled between two mountains
the news always arrives one month late,
cleansed in transit, glorified, mentioning only the dead who made

it to paradise,
and a coup d’état referred to as ‘God’s will’.

Spring kills solitude with solitude, imagination
the sap that shields you from your body. Chestnut trees
awaken, drunken men
lean their cold shoulders against a wall.

The girls here always marry outsiders and move away
leaving untouched statues of their fifteen-year-old
selves behind.

But the boys bring in wives
from distant villages,
wives who go into labor on heaps of grass and straw in a barn
and bear prophets.
Forgive me, I’d meant to say ‘only one will be a prophet’.
The others will spend their lives throwing stones
(that is part of the prophecy, too).

At noon on an autumn day like today
they will bolt out of school like a murder of crows stirred by the
smell of blood
and chase the postman’s skeleton of a car
as it disappears around a corner, leaving only dust.

Then they will steal wild pears from the ‘bitch’s yard’
and nobody will stop them. After all, she deserves it. She’s sleeping
with two men.

Between the pears in one boy’s schoolbag
lies a copy of Anna Karenina.
It will be skimmed over, impatiently, starting on the last page
cleansed and glorified, like old news.

Poet Luljeta Lleshanaku was born in Elbasan, Albania, in 1968 and grew up under house arrest during Albania’s Communist dictatorship because her family was part of the opposition. She was prevented from attending university or publishing her poems until the early 1990s. After the fall of Enver Hoxha, the studied Albanian Language and Literature at the University of Tirana and Creative Writing at the Warren Wilson College in the USA.

Since 1993 Luljeta Lleshanaku has published seven books of poetry and is now regarded as one of Albanian poetry’s major voices. Prizes she has won for her poetry include the 2009 Kristal Vilenica Prize, and she has been a guest of the International Writing Program at the University of Iowa. Lleshanaku has worked as a teacher, an editor and as a writer for film and television and is the Director of the Institute for the Reappraisal of Communist Genocide in Albania. She translated from the American and works for the Rlindja newspaper. 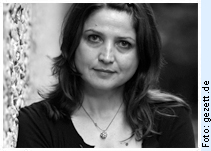