Don’t throw out the loaves
with the dishes mother,
its not the double-takes so much
its that they take you by the double.
And where have all the Nelly’s gone
and all the missus Kelly’s gone
you might have had the cleanest step on your street
but so what mother,
nowadays it not the step but the mile that matters.

Meanwhile the Bally Bane Taliban
are battling it out over that football
that will bring the local yokels
to a deeper meaning of over the barring it,
and then some scarring will occur
as in cracked skull for your troubles.
They don’t just integrate, they limp-pa-grate,
your sons are shrinking mother.

Before this they were gods of that powerful thing
gods of the apron string.
They could eat a horse and they often did,
with your help mother.
Even Tim who has a black belt in sleep walking
and border lining couldn’t torch a cigarette
much less the wet-hay-stack of desire ,
even he can see, Ireland is changing mother.
Listen to black belt Tim mother.

When they breeze onto the pitch like some Namibian Gods
the local girls wet themselves.
They say in a hurry, o-ma-god, o-ma-god!
Not good for your sons mother
who claim to have invented everything
from the earwig to the slíothar.
They were used to seizing Cynthia’s hips
looking into her eyes and saying
I’m Johnny come lately, love me.
Now the Namibian gods and the Bally Bane Taliban
are bringing the local yokels
to their menacing senses
and scoring more goals than Cú Chúllainn.
Ireland is changing mother
tell yourself, tell your sons.

Rita Ann Higgins, born in Galway in 1955, has published numerous volumes of poetry, as well as several plays. One of 11 children, Higgins left school at 14 and first began to be interested in writing during a long stay in hospital in her 20s.

In an interview she described her decision to become a poet with a typical lack of pretension: 'You didn’t have to worry about tenses and verbs. You could write a poem without a verb, and if you didn’t know what a verb was – and I didn’t – it was ok.' Her poems, similarly ironic in tone, have been awarded numerous prizes. 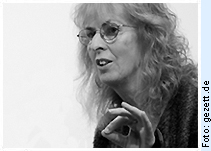 Higgins has held the post of Writer-in-Residence at several Irish Universities, undertaken readings at Oxford, Queens, and Yale University - where her poems are also part of the Literature Curriculum - and at conferences in Germany, Austria, Hungary, Belgium and Israel. Her poems have been translated into Hebrew, German, Italian, Dutch, French and Swedish.