in our days this is what we have: instruments, practice.
to operate the skin off of an eye - what do you take as instead of.
maybe for starters something out of our abundance, a bunch of grapes
a bowl of eyes, all of them dead. the bowl becomes a valley
the eyes grow looks and start to teeter through the grass, in shock.

but such a herd of eyes, alarmed, is still incapable of any impact.
focus is needed, a bustling ‘round the nous of something, and direction
and please remember, medusa isn’t guilty for what she achieves. then,
you want to know, what is a herd to do if growing snakes is not an option

and grapes. are there still those who tread the grapes among us? touch and tradition
not to be mistaken for the decoration of our continent? the herd is parted, dogs incorporated.
everyone’s trotting, but not marching, and while one half is busy treading grapes
the other lounges, barks, aborts the bleating, underrated still in their fatigue.

then at halftime the ones with now-red hooves sit down to bathe their feet
the drunkards start to wash their hooves attentively: elaborate redistribution
of exercised employment. what chew the cud of solidarity and camouflages now
itself to pose as just another duty that has been forgotten — a gesture that remains.

tbd: whose surgeon tips our bowl, a mirror in defence of medusa. 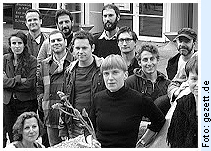 Gregor Podlogar (born 1974 in Ljubljana, Slovenia) studied philosophy and has published two books of verse to date. In 2003 he created an experimental book about New York City with a painter and a poet. Gregor Podlogar lives in his birthplace, Ljubljana, presents cultural broadcasts on the radio and occasionally performs as a DJ. He also translates contemporary American poetry (C. Hawkey, L. Solomon, P. Killebrew, A. Berrigan) and is the editor of the Slovenian edition of lyrikline.org.

Gwenaëlle Stubbe (born 1972 in Brussels, Belgium) is a poet and performer. She takes part in various radio programmes and does readings in both French and Flemish. Her poems are like little stories starting in day-to-day things and quickly drifting into the surreal. She describes her own texts, which are often about men, as “a small revenge on one half of humanity”. On stage she is a lively performer whose voice, poise and movements accentuate the music of her language. Gwenaëlle Stubbe has lived in France since 2002.

Poet Katharina Schultens (born 1980 in Kirchen, Germany) published her second collection of poetry, gierstabil, in 2011. For her first collection, Aufbrüche (2004) she won the 2005 Martha Saalfeld promotion prize, with the jury praising her for developing “impressively worked poems where ideas meet reined-in impressionistic power in great lightness and certainty of form”. Other awards include the 2007 Georg K. Glaser promotion prize and the promotion prize for the Art Prize of the State of Rhineland Palatinate in 2009. Since 2006, Katharina Schultens has been working as a research assistant at the Humboldt University in Berlin, having previously studied Cultural Studies in Hildesheim, St. Louis and Bologna.

Olga Ravn (born 1986 in Kopenhagen, Denmark) lives in Kopenhagen where she works as a poet and literary critic. Her first collection, the highly-praised Jeg æder mig selv som lyng (I devour myself like heather) was published in early 2012. This collection is primarily concerned with growing up, with the physical feelings involved, the expectations of others around one, with urgent love, sex and forbidden things. These topics are dealt with raw openness and nevertheless sensitivity in carefully constructed forms. Olga Ravn also works as an illustrator.

Georgi Gospodinov (born 1968 in Yambol, Bulgaria) is one of the most translated Bulgarian writers in the post-1989 period. He lives and works in Sofia, writing a regular column for the Bulgarian daily newspaper Dnevnik and editing a literary journal. He has published four volumes of verse and won various literary prizes in Bulgaria. A selection of his poems has been published in German translation in Kleines morgendliches Verbrechen. Gospodinov became internationally known in 1999 primarily for his idiosyncratic, experimental novel Estestven roman (Natural Novel), which has been translated English and German. In 2008 and 2009 Gospodinov was a guest writer in the DAAD Artists in Berlin programme. As well as writing poetry and prose, he is also a successful scriptwiter and playwright.