Saul Williams was born on February 29, 1972 in Newburgh, New York. After graduating from Morehouse College with a B. A. in acting and philosophy, he moved to New York City to earn a Master's Degree at New York University in acting. There, Williams found himself at the center of the New York cafe poetry scene.

As a writer, Williams has been published in The New York Times, Esquire, Bomb Magazine and African Voices, as well as having released four collections of poetry. As a poet and musician, Williams has toured and lectured across the world, appearing at many universities and colleges. Williams has also worked as an actor and screenplay writer. He served as both on the critically acclaimed film Slame. 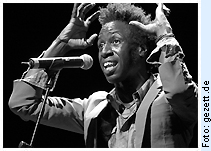