The anti-travel travel poem suggests the road
romance & regrets
the endless paperwork we left behind
I dreamed of walking boots that wouldn't lace
anti-travellers can never get lost
in a swamp of Choice we must take
the American grid pattern endless
military runways, the borders
of Empire, take-off zone & rabbit fence
keeping peace at the ruined city gate
where crows consider life in a decommissioned bomber
the line I have lain too long on the beach
staring at the awesome winter surf
is prelude to destruction & creation
the anti-travel travel poem does not
ask for directions on a road no one's taken
time arrested at a six-ways crossroad
where cremation crews shoulder the Prince’s corpse
malicious hangers-on decide its time to quit
and humans go on burning quietly
find shelf space in a Singapore of metaphysics
food halls where no one's lost
no one's found, no one needs directions
each well meant instruction (go straight
through the cemetery, turn left - or was it right?)
leads to the wilderness of whole new forests
wholly dedicated to paper (show us your ID, Dr Death!)
Sure not everyone’s perfectly matched
even the President preferred golf,
the curve & arrow of ball and club, the flagged
plantation we thought would abolish
inter-island piracy forever, & snakes
that hide in elephant grass all know
how dangerous the sedentary life
being cute & poisonous at the same time
exiles mistaken for natives
non-travellers who decide to stay
feral & primitive, go loose, develop the local accent
camp on the edge of what they know best:
abandoned village with Pepsi sign
a dog dozing in a broken down truck
in the mountain's two thousand metre air
the sign on a frog statue
SORRY, NO ROOM SERVICE
hasn't changed since Eisenhower's visit
a red stop sign marks disused
industrial estates only film crews stop at
checkpoints for the apprentice guide
and even the ICBM stalls
on a one way track to Krakatoa
with human maps it cannot read
rivers stop, flow back, released
from the burden of their own
meanderings, the drunk boatmen, Ophelias
overgrown bloated with silt, good for growing moss
from that moment a bird dropped seed
of grass & trees on no-where-in-particular's
shady undergrowth & the poem's farms & gardens
revert to shaggy Edens where no-one is a stranger
in a Kingdom of minute-by-minute ritual
where we know belonging, we know how.

Born in London in 1960 to an Anglo-Australian father and a Thai mother, Adam spent his childhood in South-east Asia, before migrating to Australia where he graduated from the University of Sydney in 1982. In 1982 he spent six months living with his relatives and learning Thai in Bangkok. He was a co-editor of the poetry magazine P76, named after a failed Leyland car model, and for a time was associate poetry editor for Heat magazine. He has traveled widely, visiting Thailand, Malaysia, and Cambodia; his experiences overseas continue to inform his poetry. 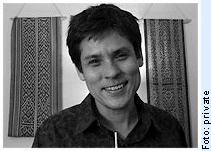 Foto © private
Aitken published his first collection, Letter to Marco Polo, in 1985. He has since published five further poetry collections, and his poems and short fiction have also been published widely in anthologies and literary journals. For some years he has taught narrative writing at the University of Technology, Sydney.

In 2006 he obtained a PhD in creative writing. In 2010 he was the Visiting Distinguished Writer at University of Hawai’i, Manoa. His poetry and prose have been widely anthologized. His words are also immortalized in bronze on the Avenue of Nations sculpture at Centennial Park, Sydney. His most recent books of poetry are Eighth Habitation, which was shortlisted for the Adelaide Festival Award, and Tonto’s Revenge, (Tinfish Press, Hawai’i). In 2012 he was resident at the Australia Council’s Keesing Studio, Paris, and in Southern France, where he spent six months learning French and completing new work.