1. The pencil becomes blunt after a year
2. I did not think that she walked in
3. The satellite channel she watches is zero point zero
4. A friend said he hates Radio Head because they damage the music in the way Nirvana or Bob Dylan has done to the music
5. The Maw Naing 1971 – 2030
6. The yawning and four mouths
7. ... but what has been produced is the chaotic future
8. ... doubling the damn ....
9. The nails are black, the middle finger is raised upright
10. Black lines, more limiting lines in the black
11. What is held in hand is a leash, but don’t know if the dog is ahead
12. Upcountry men, five feet five inches tall, standing like that
13. Read only the words in parenthesis
14. Days are slowly walking out of it, those days
15. This is the partial beginning
16. In the past decade, In the past decade, In the past decade, In the past decade, In the past decade, In the past decade,
17. The break has failed for quite some time, but everyone comes along in the car as it is
18. I don’t want to give promises, you have to help yourselves
19. I don’t want to read the line 80
20. You can’t pick up anything. Do you believe that you’re not out of your mind?
21. 9 is the end point at the very end
22. The foot has to be put flat after being lifted up. The water in the glass on the table takes the shape of the glass. A stone is thrown up and it drops to the ground. Things normally drop to the ground. The bicycle goes along the horizontal line. It slows down as it goes up the hill. It gathers speed as it comes down the hill
23. This square is ...
24. It’s better to fly up from the vast field than to lay the foundation
25. 25 is like a wound that keeps bleeding
26. Because it’s a stationary wheel, it can be checked if the grooves on the tires are worn thin, what have pierced the tires, whether they’re muddy or not, if there’s rust or if the tires are deflated.
27. Or another event or anywhere
28. Conversations that took longer than four or five years are no longer made
29. A conscience is obvious that is aware of the constantly changing mind
30. Original style and presentation is good but .... is bad
31. Choose a job, a family, a damn large TV set, a washing machine, a car, an electric can opener, a comfortable dress, choose a DIY, choose Sunday way of life, choose nonsensical muttering of words while sitting on a cheap, synthetic leather sofa, choose something that is nothing in the end, choose a future that’s coming into contact whether a step is made or not,
Why should these things be done?
32. Words will come out that say ....
33. A car is being driven into a filthy street, but this is not a secret. In other words, a filthy street is being driven into a car, a filthy car is driven into a street, a street is being driven into a car
34. Pussy! pussy! pussy!
The door was locked last month. The same door was locked again with another lock by the end of this month.
35. For example, overall events are more important than a particular one happening to you currently
36. Twenty reasons for synchronous equality and 10 unknowns
37. Todays that keep expanding day by day
38. Intimate contact between opposite sexes but it should not exceed the speed limit of 30m/hour
39. I’m pulling out the nail that was driven in in the early 1960s, all by myself ...
40. 11 o’clock. Monday. On the white on the black wall
41. Don’t cry for me, Argentina*
* You can replace with any other country.
42. Who killed the Ant^?
^ You can replace with any other thing.
43. 41 = 42
44. Expecting, we are expecting, we are expecting for centuries, you are holding on to those expectations, then you are expecting together with us
45. event = event
A bucket has been brought and put the event into it. event = event is upside down in the bucket, with the spelling going wrong
46. Echoes arrive very late.
47. People are not to be put in a straight line
48. He says, he shot John Lennon, then he says he’s sorry
49. Steps are being made inside the room, by one leg after another, by one leg after another, steps, steps are being made, one after another, walking, but have no idea if the body is slanted and moved, but keep walking, take a pause for a few seconds, then keep on walking, keep on walking, keep on walking. ...
50. “50 multiplied by 2 = 100 lines” is put in parenthesis
The maw naing
4 – 9 – 2005 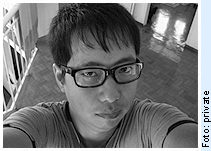