[It feeds half the world]

It feeds half the world, and no one bathes
its wounds, body in pieces all over town,

in its plastic-wrap winding sheets, a neighbor’s pig that you hardly recognize,
fond of its betrayer, it took its savaging calmly

so that we could live long, it doesn’t speak, say
this is my body, say it, you pig,

your rosy flesh of that superior breed, say it, take this
and eat, inexperienced surgeons, you stitch up the bullet wounds,

investigate the causes of death, you pigs, at least
we don’t eat the organs, we are not pigs,

we are not, we do not, say it, say, do you see a familiar
blue-eyed being when you look in the pig’s eye, do you hear

laughter, you pig, do you understand whole-hogged joy
and sadness, don’t say there’s nothing human there,

the virus only connects us; birds, pigs, and apes.


Helsinki, Saturday, the second day of May, in the year 2009

Jyrki Kiiskinen, born in Helsinki, Finland, in 1963, is one of the central figures in Finnish literature and is active on many fronts: Kiiskinen is a poet, author of children’s books and translator of, among others, Haruki Murakami, Octavio Paz and Isaac Asimov. He was a co-founder of the “Living Poets’ Club” and teaches Creative Writing. His poems deal with current political themes. His debut as a poet came in 1989, and since then he has published six collections of poetry and three novels. He has received many prizes, including the Eino Leino Prize and the Tanssiva Karhu Prize for Poetry. His texts have been translated into some twenty languages. 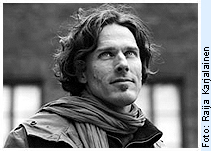