houses at dusk. on track of houses. out-of-the-way houses.
houses alongside beltways. houses on the edge of airports. houses
500 meters from the last gas station. houses on
the other side of the hill. houses nearby the mechanical
lighthouse. houses at the level of the freeway. 3 houses on the hill.
houses alongside the railway tracks. abandoned houses,
houses for sale. houses which do not allow to be talked about.
houses with gardens. houses with the scent of Ethiopia. houses
with the sound of sand. parental houses. the house of my brothers.
and the house of my sister. married house. divorced house.
the house of “mad Orlando”. house of pleasure. the house
in which language strives with the wind of memory. the house
of crime. the house in which love was committed. the drunkard’s
house. and the house of the lover. love house. a whore
house. a house with a derelict yard. a house with
poor children. house with summer and winter
vacations. the house of Chekhov and the house of Gogol. the house
in which Joseph sleeps. the house from which Egypt flees. the house
in front of which a beautiful woman spreads her wash. the secrets of the house.
the houses of secret.

the house - I will return, it remarks.
then a wild large white head emerges
and chases me from your doors. I run.

the house - we’ll meet again, I say.
I’ve been put into the golden triangle of vrap~e,
stenjevac and popova~a, where grows the forgotten
plant of goodness.

the house  - you’ll still drink your poison.
the fieldworkers have discarded their blue blouses.
in a (1981) car I enter my home place like a drawing
out of a primer. only like this can women be old.
only like this can snow be white. only like this
can I think in a language which has left behind
all resemblances to me.

He graduated from the Faculty of Philosophy, University of Zagreb.

He worked as an editor for Quorum literary magazine and for the publishing house Naklada MD.

in collaboration with Branko Čegec he edited the overview of the Croatian poetry of the 1980s and 1990s entitled Strast razlike, tamni zvuk praznine / Passion of Difference, Dark Sound of Emptiness (Quorum, Zagreb, 1995); 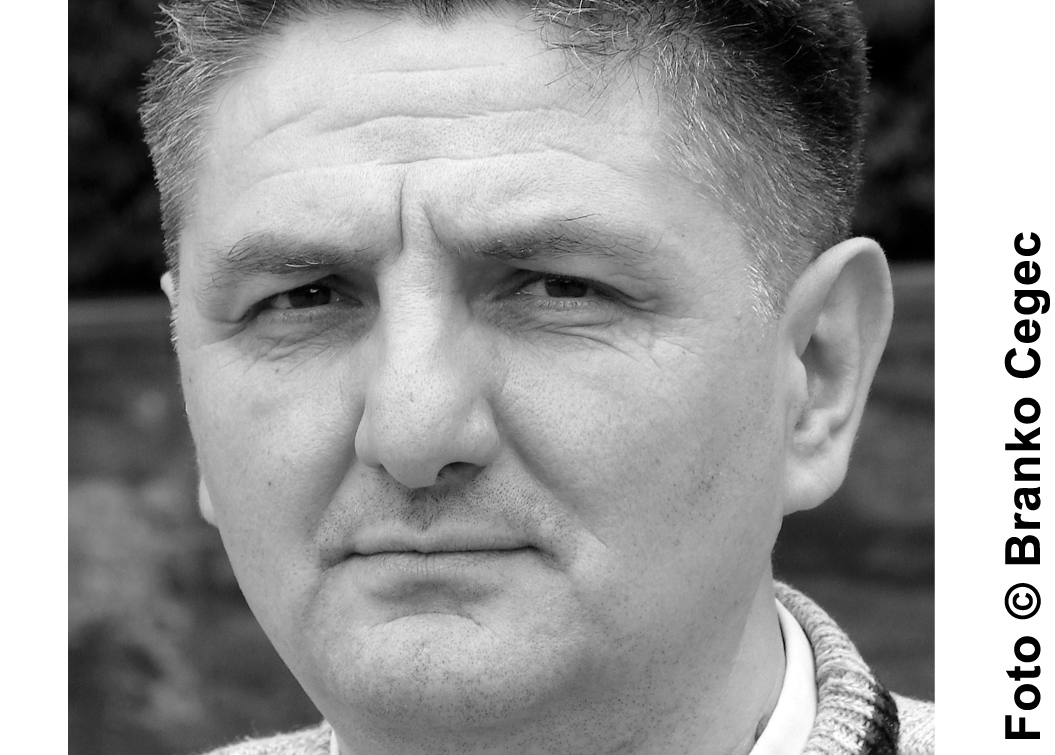 He participated in the project 'Posao dvanaestorice', romani u nestajanju / Twelve People’s Work, Novels in Disappearance (Quorum, Zagreb, 1998) with his Čovjek koji je obitelji nosio kruh / The man who brought bread to his family.

His texts have been included in various anthologies, selections and reviews and have been translated into French, Slovenian, Ukrainian, Polish, Hungarian, Spanish, German and English.

His poem Job was published as a separate bilingual illustrated edition, translated by Dražen Karaman into German, illustrated by Fadil Vejzović.

From 2001 to 2003 Mićanović had a column entitled Jednosmjerna ulica / One Way Street in the culture section of the daily newspaper called Jutarnji list. He also published literary reviews for Vjesnik daily newspaper.

The collection of his short stories entitled Trajekt / Ferry Boat won the Fran Galović Prize in 2004.