Water glasses in and glass waters like an eye glasses over
To outstare              : so waters rush down the glassy eye

Rolls behind the lustre it apportions, the eyes' armada
Bristling with quivers-full, ruddying like time-lapse orbits,

Tethered like the floats marking contours of a sand shelf,
Rotaries that saw                across the big suction pads,

Where once were carved screens, chancel walls, our house
Extraverts, inside glosses out and nothing is glossed over
But incisively broken, neatly parsed, picked apart with ultra
Precision tools then displayed in clear suspension, listed
Organs are sectioned, the roving eye performs its autopsy,
Heart confirms, wildcat operators square off flats of mud
Shaken so to slop out wells, mesh will let the catch tumble,
These are their spoils. Sluiced all dissipate where island
Purses, cowries, heat-bonded pockets, floored eyes follow
Strung skulls turning in a tuned flood, each a self quadrant.

Frigate birds reject the pallid sprouts, a foul-smelling mat
that lawn is but deaths waterfront,

The trade group daubed in white will disembark,
Agents of the tribe retrofit a blank display with hoardings,

from saturation to             alluvial.
For detail see miniature skull exploded in vitro and labelled.

So in darkness      cancellations ridge beneath finger-pads
In closure      corrugations buckle where serpents thrash
In skin-tight      patinations transfer between the surfaces
hi approach      supplied reflections writhe in anticipation
In congress        fur stops words behind the mouth, its ket
In volutes         electrical the poor ghosts in their element
In the wave function                         , in monsoon blast
Blade s of air conditioned chill, knife       a bumpy surface
In          flotillas, feel the bumps, enfilade on ocean swells

Brought to this pass          this chiliastic dead-end, human
In their peering eyes rolled back in a scoured, sanded cast.

Behind the illuminated exit sign a cataract churns on a loop.
By the emergency stairs a symmetric frenzy shuts its trap. 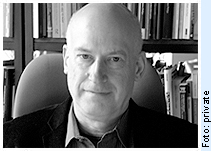