We were driven to the airport after performing
the night before, at a Hispanic Festival in Columbus Ohio.
A salsa band from California
and a poet from New York — both Puerto Rican
except for my hair.

I had gone too long between hair cuts
undecided, after a life of short hair
whether I had what it takes to look good with long hair.
Did I possess the physicality to balance
my scrawny calves — which magnifed
with every pound I imagined...if I had long hair?

After years of Tang milkshakes & individually wrapped
american cheese slices, would my non-existent upper-body strength
hold up to what I’d always envisioned?

During this indecision, it grew quickly
into one lump.
My hair, represented
a non-barrio dryness, unkept — almost
hippie-like, something that just
wouldn’t sit too well with the busload
of Boricuas I was riding with.

Here were traditional Puerto Rican Men,
from 20 years of age to 60 — very well groomed
with gold watches and wisecracks.
Here I was, feeling out-of-place as my
very non-Puerto Rican glasses kept slipping...
I was having thoughts of fitting in or not.
If you even have thoughts
of fitting in or not, you don’t.

The rear-view mirror exposed a rear view
of who I was supposed to be in this Latino Age.
All because of my hair — adding to my previously
mentioned, generally non-Puerto Rican look.

Thing is, I’m the first to not want to fit in
anywhere! When the moment you’re in — stops
to surround you — with memory and cologne
you take what’s around you, as immediate past
smiling into the future — flowing into the ebb.

On a bus ride with my brethren
us Latinos — we are gracious in our handouts.
Unconscious demonstrators of our plight, whether real
or imagined. It’s convenient to have purpose
if there IS plight...
old Salseros never die, they just find another beat.

Puerto Rican men are all my father, there’s
no getting around that I can’t help it — I know
it’s not true, but the brain tells me
what the music won’t.
And the music tells me
now — what my mother used to then, silent
as the morning he died.

All Puerto Rican men
are Salseros with impeccable timing,
just like my father — finally
taking me for a grown-up haircut
the day before he died.
Little ten-year old mop-top
spending the afternoon with dad, first and only
time — meeting his grown-up friends
at my uncle’s store — I need to use
the bathroom, I said.
He winked at the men
and told me where it was.

I turned on the light — all four walls
the ceiling and parts of the floor
were covered with pictures of naked women.
There wasn’t an empty space
anywhere...centerfolds, playmates, legs
and hips and who knows what — a sea of flesh
and glossy eyes watching me pee.

I finished quick, and came back to my father.
He said, How was it. I said, Fine. They all laughed.
As we left for my haircut he gave me a wink.
Letting his guard down for a second,
just like —

all Puerto Rican men, and I used to believe
I wasn’t one because I was in touch
with my feminine side — each of my hemispheres
fully occupied — unlike
the uneven beauty of my father.

I discovered that, this world uncovered
is like the soul
of The Puerto Rican man — occupied
by the weight of his balance      between
I
and
land
...but my vision blurs as my glasses slip.

I’m in regression — against any liberation
that’s happened to the species
since the day he died.
I refuse progress
because then — everyone will have caught up to me...
and where will I be!

I’m here
as a Puerto Rican Man of New York Soul...
representing my people
by being who I am, confused
and alienated by my own soil — which has now
become my hair.

Edwin Torres was born on June 18, 1965 in New York. He is an original member of the spoken word collective Nuyorican Poets Cafe Live. Torres created a movement which he called 'Interactive Eclectrcism', which combines movement, audience participation, music and songs. He has also created the 'Poets Neurotica', where dancers and musicians performed alongside two to four poets. From 1993 to 1999 Torres was a member of 'Real Live Poetry', performing and conducting workshops across the US and overseas. 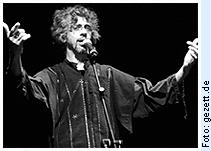 Foto © gezett.de
Torres has represented New York in the 1992 National Poetry Slam. Besides performing at the Nuyorican Poets Cafe, Torres has performed at the Guggenheim Museum, Lincoln Center for the Performing Arts and the Museum of Modern Art, amongst others.

Torres has received numerous poetry fellowships, f. e. from the New York Foundation for the Arts, The Foundation For Contemporary Performance Art, The Poetry Fund and The Lower Manhattan Cultural Council. His work has been published in a range of journals and anthologies. Additionally, Torres is the co-editor of the poetry journal/DVD Rattapallax.