Joyful is he who one good day leaves, humble,
and saunters through the streets, like on so many past days
of his life, expecting nothing
and suddenly —what’s this? — he looks up
and can see; puts his ear to the world and he can hear;
walks and feels, climbing among his steps,
earth’s love, and goes ahead and opens
his true workshop, and in his hands
his craft shines, clean, and he offers it to us,
gladly because he loves, and goes to work
trembling like a small boy taking communion
bursting out of his skin, and then
realizing how simple
it’s all been —his wages earned already—
he comes back home, elated, and feels that it is someone
who is grasping the door knob, and it’s not all in vain.

Happy the man who one fine day humbly goes out
and walks down the street, like so many
other days of his life, and he doesn’t expect it
and, suddenly, what is this?, looks up
and he sees, puts his ear to the world and hears,
walks, and feels rising between his steps
the love of the earth, and he goes on, and opens
his true workshop, and in his hands
his craft shines clean, and he passes it on to us
heartily because he loves, and he goes to work
trembling like a child taking communion
but really feeling satisfied, and when
he has finally realized how simple
it has all been, his daily wage now earned,
he returns home happy and he feels that someone
grasps his doorknocker, and it’s not in vain.

Born in Zamora on January 30, 1934, Claudio Rodríguez is one of the most attractive and original Spanish poets of the mid-twentieth-century generation. His first book, Gift of Inebriation, written in 1953, (“poetry – adolescence – as a gift; and inebriation as a state of enthusiasm, in the platonic sense; a state of inspiration, rapture, ecstasy or, in Christian terminology, fervour”), charted the course that his own poems and those of his generation were later to pursue. 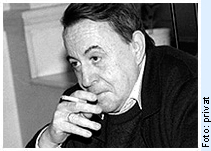 Foto © J. Arcenillas
In 1951, Rodríguez moved to Madrid where he majored in Philosophy and Letters, graduating in Romanic Philology with the monography entitled The Magic Element in Children’s Castilian Nursery Songs. In fact, his biographers point out that as a young man, the poet had two very distinct traits: he was very fond of observing and reinventing children’s nursery rhymes and games and, on the other hand, he was a roamer and loved being outdoors: his wanderings through the streets of Zamora, on the shores of the Duero River, and in other Spanish towns and cities – his endless moving around – constituted, to a certain extent, the pulse of his writing.

In the capital of Spain he became closely acquainted with Vicente Aleixandre, celebrated poet of the 1927 Generation and winner of the Nobel Prize, at whose door countless young poets of his time knocked, their poetry manuscripts under their arms to be shown to this master of poets.

In spite of its extraordinary brevity, Claudio Rodríguez’ work, completed with another four poetry books of rare beauty: Spells, Alliance and Sentence, The Flight of Celebration and Almost a Legend – is one of the best and most rounded samples of poetry conceived and crafted as an exploration of knowledge.

The poet’s great observation skills, his natural rhythm, concrete and at the same time transcendental, merge into a most beautiful lyrical body of work imbued with three essential values: solidarity, simplicity and happiness.

Rodríguez was very active as a teacher and lecturer. Between 1958 and 1964, he was Spanish reader at Great Britain’s Nottingham and Cambridge Universities. He was also Professor of Spanish Literature at several North American Universities having local branches in Spain. The poet was reknowned for his translations, into Spanish, of the works of T.S. Eliot.

Claudio Rodríguez won some of the most important prizes in Spanish Literature, such as the Adonáis Poetry Prize (1953), the Critics’ Award (1965) and the National Poetry Award (1983). In 1993, he won the Prince of Asturias Prize for Literature, and, five days later, the Queen Sofía Prize for Iberoamerican Poetry, sponsored by the National Heritage Institute and the University of Salamanca. He was made a member of the Royal Spanish Language Academy in 1987. He died in Madrid on July 22nd, 1999.