In the Silicon Valley, once called "Valley of Heart's Delight," the spider builds its towers
From grass and branches
In Silicon Valley
Spiders drink from the blood of the place

And the branching magnolia, breathtaking blossoms of the magnolia, white, Daughter of the lofty tree,
Stealing the spirit of the sun
From the sun
And pouring it over the heads of lovers
Showers of rays
Crystalline
Shattered

Good morning, California
Morning of the pirate
Who has no ships
Raiding the Pacific Ocean
Without a lighthouse
Assaulting the beach at Santa Cruz
At dawn
Naked
Unarmed

Good morning, beach waves
Morning of poetry
And of poets

In City Lights, in the famous City Lights, the bookstore in San Francisco, there in North Beach, I met the gang one by one on a Sunday morning. It wasn't a meeting, but I pictured them having a late morning drink in Vesuvio Café. And in the little alley linking City Lights and the darkened bar, a girl with sleepy eyes is singing Bob Dylan. A Chinese man from the neighborhood behind is dancing. And the girl is knocking on heaven’s door again and again. And she’s playing. She’s knocking and singing. The guitar weeps under her fingers and passersby stop. Some sing along and some disrupt the reeling dance of the Chinese man. The street fair in the alley is jammed with visitors from the time of the poets. Two girls are selling feathers and the dreams of American Indians. A pregnant girl barely past twenty is smoking like crazy and displaying two hats and a dress. A man is selling books and water pipes. The Chinese dancer looks drunk and free. I doubt he knows any of you. But the guitar is weeping under the fingertips of the guitarist of 10 am.

But
What time is it now?

"Bukowski, please, what time is it now?"
The girl who was singing Bob Dylan
Is gone
It seems Heaven’s doors are closed
And you
It’s like you returned
To your old dream of a poem
Allotting volcanoes
Equally
Among the neighboring hills
I'll take the opportunity to correct you a little, O Charles
With all due respect to your experience
And your taste in wars
But the First World War was never the best
Once you were gone, more wars broke out
That were more romantic
And filthier
Allow me to correct you
I don't blame you
For in life we talk about what we have lived
About what we have seen in movies
And read in books
But the most beautiful
And the filthiest things
Remain fettered to doubt
Beyond certainty

Desires of the damned
Are not fulfilled by angels, O Charles
And we are stupid
We yearn in vain for the touch of the angel
In a city haunted by Djinn
As for the girl who was singing in the neighboring alley
She’s gone
Gone is the pregnant girl too
Gone is the reeling drunk
And the man selling books
And water-pipes

Then you came back to the grass where you nap
On scattered palm fronds
Among the orange trees
And the pomegranates
You said: Greetings, Marrakech
Greetings
O Mother of Gardens
I was thirsty so I reached out for the spring
O spring, increase my thirst
For my blood is colored with water
My blood is tainted with
Water

Yassin Adnan is a Moroccan writer, born in Safi in 1970. Since his early childhood he has lived in Marrakech and holds a BA in English Literature from  its University. Though he got a graduate diploma in Teaching English as a Foreign Language from the faculty of Education at Mohamed V University, he has worked for more than two decades in cultural journalism.
He published “Contemporary Voices” magazine and then “Poetry Raid”, which embodied the new poetic sensibility prevalent in Morocco in the early 1990s.
Since 2006, he has researched and presented his weekly cultural TV programme "Masharef" on the first Moroccan channel. 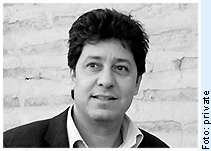 “Hot Maroc” (2016), his first novel, was nominated for The International Prize for Arabic Fiction 2017.