Only a bit of Goya: letter to my daughter

Do you remember saying life was like queuing up?
You were little, your hair lighter,
same eyes, though.  In the metaphor given
to you by childhood, you thought of
life and death, of who would come next
and why, and about the total absence
of reason in that wool-thread, bundled dream.

Tonight, a warm night bursting
into june, your hair darker,
I want to tell you that life, too, is
a line in space, a line in time,
and that your place is coming after mine.

In the manner of a man who once
remembered Goya in a letter to his children,
I’d like to tell you that life is also
this: a gun that is sometimes loaded
(as was said by a lone woman who greatly
gardened). Making crème brûlée, writing
last will and testaments, or speaking of bowls of batter – that’s
loving  you, for sure.  But it is also some disconnection
from life, your entrenchment, and mine, in a fake,
discontinuous and endearing line.

And I want to tell you of the bonds in life,
of its inhabitants beyond the air.
To tell you also that respect, whole and infinite,
does not necessarily come after love.
Nor before. That the lines are only useful
as a manner of seeing, as a way of ordering

our astonishment, and that parallel points
are possible, mirrors and not windows.
And that all that is well is good: line
or bundle, two such heads in one body,
a fireless dragon, or a unicorn

that threatens very lively flames.
Like the light hair you once had
which grew darker, but still is light,
and like the way your childhood metaphor
fitted the poem, revealing

itself so handy for talking about life, the life,
without the batter bowls, broken or intact, which is
still good, even if in a dissonant bundle.

I don’t know what in a nearer future you’ll be told,
whether whoever will inhabit such life spaces
will be giant eyed or monster horned.
Because I love you, I’d want you as an antidote,
an elixir, that would make you grow up
all of a sudden, flying, fairy like, over the line.
But because I love you, I will not.
And on this warm night bursting into june,
I’ll tell you of the bundle and the line
and of all the different ways of love,
made of small astonished sounds, when what is
just and human in there is intertwined.

Life, my daughter, can be yet
another metaphor: a tongue of fire;
the white nightmare of a shirt.
But it can also be this bulb you gave me,
in blossom now, a year past.
For it had earth and water softness
and a balcony to freely walk.

Ana Luísa Amaral was born in Porto, Portugal in 1956. A poet, professor of English and American literature at the University of Porto, pioneer in gender studies, she has published numerous volumes of poetry and children's books, and emerged as a Dickinson translator. She has received numerous awards for her lyrical work, which has been translated into several languages.

Ana Luísa Amaral repeatedly confronted phenomena in the literary tradition that she found strange: male-dominated poetry and the sagas of Western culture. Women's themes often clash with images of biblical origin in her poems, or Greek myths are retold. 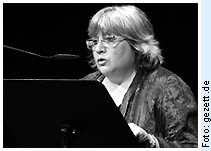