I Trust In Dragons!

One afternoon I sidetracked into a church,
maybe for shelter, maybe for silence.
Red brick, a soft flutter of moths,
a dark-filled painting on a darkling wall.

Gee up, dragon, get him! With the south-east wind at your wing!

In the painting, in a rhythm of creacking pews,
like a No-theatre classic - George and the Dragon
have led each other on into a sacred contest
eye to eye, known of a thousand years.

Gee up, dragon, get him! Devour that good-for-nothing George!

That day in the church, ten wing-hours away,
I recognised you, Drako, among the monks,
in the whites of your eyes flashed a golden age,
when, in human skin, you tended tourist flocks.

Gee up, dragon, get him. Burn down that house of cowards!

Asko Künnap (born September 6, 1971 in Tartu) is also an artist, designer, and advertising businessman—although, true: he just recently "retired" in order to dedicate his time to poetry and art. He has published five poetry collections in addition to a number of books put together in cooperation with friends (primarily Jürgen Rooste and Karl Martin Sinijärv: together, they have been dubbed the "three little pigs"). Künnap has won awards for his poetry, design, as well advertising. 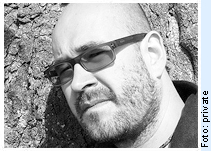