[Have you seen my fish?]

Have you seen my fish?
It was hunted by an octopus.
That had tentacles like I have fingers on every hand.
Maybe it mummified my fish.
Maybe I’m sitting in the belly of the fish.
Maybe the fish touched both of us.
I once held a trilobite to my ear.
It slowly crawled inside.
It was very careful all the while.
And so sonorous.
It would have preferred to stay outside.
But I let it inside.
I later threw a trilobite out of my ear.
It would have preferred to stay inside.
But I kicked it out.
I watched it a while as it searched for me, baffled.
Then it slowly perishes.
Later still a fish came by.
It had lost its bearings.
It was pale and blind.
It didn’t have eyes but a sense of light.
My third eye, the fish said
lies behind my forehead.
It lets me be in enveloping darkness.
Not in external gloominess.
I’m a cave fish.
My paths are lead deep inside.
I don’t return.
When the octopus hunts me
each of its suction cups is an eye.
This way he looks his fill.
At night, when everyone’s asleep, it’s day for us.

Kerstin Preiwuß, born in Lübz in 1980, initially studied German, Philosophy and Psychology, later, until 2009, at the German Literature Institute in Leipzig, where she now lives and co-edits the literary journal Edit. In 2006, her first book of poems, „nachricht von neuen sternen“, was published, followed by „Rede“ in 2012 and „restwärme“ in 2014.
Her poems set off movement below the threshold of consciousness that creates a shift in ways of speaking and perception. Poet Monika Rinck finds in her poems a “complexity in things that are simply said, although the simplicity, like free style, is the hardest to achieve.” 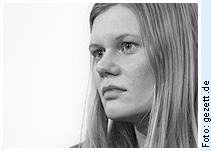 Foto © gezett.de
Among other distinctions she has won the Working Scholarship of the German Literature Fund (2010) and the 2012 Mondseer Poetry Prize (2012).

Kerstin Preiwuß is married, has two children and lives in Leipzig.