Simantini wanted to be a model

Simantini wanted to be a model
Simantini could not be a model.
Near Fuleswar Station
Simantini’s hair is caught in the train line.
Her scarf caught, Simantini in the train wrote
Lines after lines
In her black notebook
copied down the ramp, star, and brightness
The notebook that the police is looking for.
It’s found at the Ma Sati Saloon.
Simantini’s hair, nails, lips, eyelashes
Are scattered
In Liluah, Sodepur and Naihati Junction

Simantini wanted to be a model
Simantini could not be a model.
Drumbeat footlight flying kisses
Simantini had asked for. Now
In a sky beyond the sky
Flowers flourish through her torn dress in Fuleswar

Matangini and Sati: In Hindu legend, Sati is one incarnation of Shakti or the female supreme power. She gave up her life to uphold her husband’s honour. Knowing this her husband Shiva took her body on his shoulder and did a destructive tandava dance, which scattered her body parts all over India creating 52 peethas or places of devotion. Matangini is also a form of Shakti.

Yashodhara Ray Chaudhuri (born 1965) is a poet residing in Kolkata, West Bengal, India. She produced collections of Bengali poetry. She studied philosophy at Presidency College, Kolkata, and was affiliated with the University of Calcutta from 1984 to 1989.

Her work deals with the themes of love, alienation, relationships between women, and of late, politics. She also translates from French into Bengali and has translated the Leonardo Da Vinci biography written by Serge Bremley in 2008. 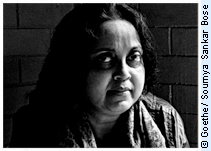