1
When my mother had been for a quarter century
a mother, and a wife, though over the years she could just
as well
have forgotten that, when she'd become
how a respectable woman had to be
wiser than grandmother, more devoted than her aunts
more frugal in the kitchen and in love
than someone born with all the luck
when she'd flicked enough crumbs from the tablecloth
and buried her dreams of ever being a lady
in a fur coat like the ones in the prewar
fashion magazines she hoarded at the back of the pantry
when she began to look into her daughters' faces
for traces she didn't find in her own
when she no longer used to wake up afraid
after dreaming that she hadn't turned off
the iron, when she dared to put her feet up
in the afternoon, cancer was eating
into her womb, growing rankly
and slowly pushing my mother out of life.

2
Ten days after her death she was suddenly back
in a dream. As if answering some call I was drawn
to the window of our old apartment. In the street
four characters were waving from a battered V.W.
One of them pressed the horn. They looked more or less
like my Berlin friends five years ago.
From the back seat a woman suddenly waves:
my mother. At first I can see her only
half hidden by her new friends.
Then I see her up very close
like in the movies, then her thin white arms
where even in close-up no hair
can be seen. When she bustled about the stove
the flames often singed off her hair.
On her wrist she's wearing the silver bracelet
my father gave her before they got engaged.
She left it to me. I go down the polished stairs.
At the door I can hear a giggle. Mama!
I call, the rest of the sentence won't come.
My mother's boxed in between two boys
who are laughing. She hasn't been so happy for years.
"Do you want to come too?" she asks me. But there's
no room in the car, I say, and look
embarrassed through her silk blouse
she never wore one like that when alive
over her young, still pointed girl's breasts
and think, I'll have to call father. Then the motor
revs, the rickety door is slammed
from inside. At the door I could kick myself.
I haven't even looked at the number plate.

1
When my mother had been mother
for a quarter of a century and wife, but she could
forget that in time, when she had become
just like a respectable wife should be
wiser than her grandmother, more devoted than her aunts
thriftier in the kitchen and in love than a woman
whose fortune fell into her lap
when she had flicked enough crumbs from the tablecloth
when she had buried her hope of ever being a lady
in furs as in those prewar fashion magazines
she still kept safe in the back of the pantry
when she began to look at her daughters’ faces
in search of traces which she did not find
in her own face, when she no longer awoke from fear
because she had dreamt of the iron
that had not been turned off, when she
sometimes dared to sit with her legs crossed
early in the afternoon, a cancer ate its way
into her womb, grew and spread
and forced my mother slowly out of life.


2
Ten days after her death she was there again suddenly
in a dream.  As if someone had called I was drawn
to the window of our former apartment. On the street
four characters were waving from a battered VW
one was leaning on the horn. That's about the way
our Berlin friends looked five years ago.
Then a woman waves too from the back seat:
my mother. At first I see her
half hidden behind her new friends.
Then I see her alone
very large as in a movie, then her thin white arm
which even in closeup does not show
a single hair. When she bustled about the gas stove
the flames had often singed her hair.
On her wrist she is wearing the silver bracelet
that my father gave her even before their engagement.
She bequeathed it to me. I race down the polished stairs.
From the door I can hear a giggle: Mama!
I call, I can't seem to get the rest out.
My mother sits squeezed in between two
laughing boys. She hasn't been that happy for a long time.
Don't you want to come along? she asks.
But there's no room in the car, I say and look
with embarrassment through her silky blouse
she never wore one like that when she was alive
at her young still very pointed girlish breasts
and think, I must call Father. Then the motor
roars, the shaky car door is slammed shut
from inside the car. At the house door I could kick myself.
I didn't even notice the license number. 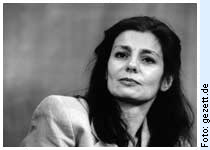