Reciprocal devouring of lifeless as well as partly animated processes

It fell from the vaults
in cover of waves, a studied surreptition
on the forest paths
the pine sprang towards its own tree height. Surveillance.
like the fish cowers in attendance of its prey, built the same,
eye turned upward, until in this body
suddenly dwells the strange – height
e.g. as the downfall reversed
returning home to itself, buckled, from a long way

That the pine without weighing
stands on the foot of the observer, a mere wind tree
immerses itself upward in the floating needles
the drawn bath of an afternoon miles deep
without a splash
it flashes its animal blazon
the skin tanned by only the sky's blue
skin of the fluke disappearing: thus to die,
trained to oceanic loneliness in the end
the artistry is best out there
the impact echo of branch and trunk
when the sea is calm and the hands are 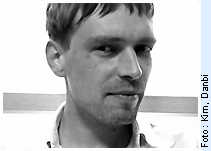