[FIVE MOVEMENTS FROM A MID-AIR GESTURE]

Course of time foreshadowed over folds of age: life, the settled, the unsettled (a history already foreshadowed by contraction, a reality that shall become fiction: fiction folded to the skin / on your own). There, on the thigh, that knot where a constellation is held, a universe over which all garments of the epidermis are gathered.

Molar, a symphony of moles on the left arm.

Score of signs where faith flickers. A gesture, a brush where bodies shelter one another.

13:07
Silhouette of the spine, flame of shadows where a caress is kept. A frame that remembers, in every finger (senses of the other in a foreign body) the silhouette relates its own curvature. To pronounce through proximity the nomenclature of desire. Songs, murmurs, pathways established among cracks on the backs of knees. Slots of time, gestural inclination where death is hastened. Hollows, muscles, fat in craters between bones and rib of blood that will not speak: ethereal syllables –I whisper–: the sound / twist / of every fold.

13:28
The circular nature of a thought. What the body hauls in its veins (metaphor). The liquidness of inner bays and channels. Does it hide between the backs of knees? Gaze lost precisely on the horizon: lichen. Fragility of the coastline within a blind spot. Short-cut or breeze that covers the flight of certain words. Hand that crosses, brushes against the face, pointing toward the place where there are murmurs, only murmurs. The exactitude of an inner babbling where the true manner of paternal voices accrues behind the left ear. The paleness of Eleonora’s hand tracing the contours of an imaginary elephant. And that smile, that half-smile at the corner of his mouth.

13:40
The furrow where the thistles have left marks is blurred. Overflow. Shoal of fish that wriggles between legs. Blood boiling across ramifications. Abrasive. March over the thigh that spreads. Every centimeter, a beginning. All division, imprecise. Overflow. The leaves of trees fall onto her shoulders. And then the world fell silent.

13:53
Anomaly of the pose, body weights positioned with regard to vulnerability. Each wound overcomes and extends an aura. Counterweights. The sensitive nature of the navel, memory of the belly, moisture of the word mother. Weights that restitute the failure of the mind. In silence, folds, fissures, stays are positioned. Overflow.

Granite and tobacco overcome. Landscape. Hands knot a sonata in mid-air –when the voyage intuits the horizon, time gravitates over the eye. Lichen. Underbrush, a desert where lips are cracked from never saying your name.

Rocío Cerón is one of the major Mexican poets and multimedia artists of her generation. She combines poetry with music, performance and video and creates what she calls "Galaxy Projects: Loads of poetry, body, sound and image."

She has written several volumes of poetry including Basalto (2002), for which she received the Premio Nacional de Literatura Gilberto Owen. Her collections Imperio/Empire (2009) and Diorama (2013) were published as bilingual Spanish-English editions. The latter won Rocío Cerón and her translator Anna Rosenwong the Best Translated Book Award, awarded by the online literary magazine Three Percent (University of Rochester). Her collection Tiento, which came out in 2010, appeared in German translation in 2011 (translation by Simone Reinhard); and in Swedish in 2012 (translation by Ulrika Serling). Her poems have also been translated into Finnish, French, and Turkish. 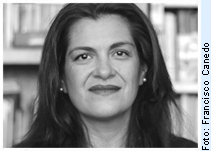