On the headland to the lighthouse,
a brown detour of caterpillars
crimped end-to-end across the road.

I've only seen such blind following
in the patient, dull dole queues,
or old photos of the Doukhobors
the world's first march of naked people.

I watched over the line for hours
warding off birds whose wings, getting close,
were like the beating of spoons
in deep bowls. I put a finger to the ground
and soft prickles pushed over,
a warm chain of hair.

This strange sect, wrapped in the sun
like their one benefit blanket
marched in brotherhood and exile.

Later, a group of boys
(their junta-minds set on torture),
picked off the leader.
Each creature contorted,
shut into its tight burr.
I could only stand like a quiet picket
and watch the rough panic.

I remember them, those caterpillars,
pacifists following their vegetable passion -
lying down in the road and dying
when they could no longer touch each other. 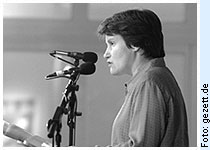