On tiptoe.
As snow in February
Will cross the windy season.
Dirty with mud, the Surb-Sarkys’ wind will smash against the foothills
As the last passenger at a platform,
Her handkerchief fluttering,
Lets the late train pass,
Pass like blood passes from the single artery you cut the night before,
Slowly
Like a trembling drunk who is the last one
To leave a wake where the table is already half cleared.
And a guest
Sends useless praises to
The exhausted housewife.
That’s how it goes.
It melts away
Like a silver ring on a finger of an elderly person.
A breast on the body
Flies away
Like a dog before its death,
Gives way to another dog, gives up the yard it has been guarding
Then staggers along the road,
Feeling sad for its lost masters.
Carefully, holding her breath,
Like a mother
She closes the door of her baby’s room when she is sleeping.
Like a thief,
With a pocket full of somebody’s money—somebody’s future sorrow,
She runs away silently out of town.
So shamelessly,
To shoot the hearts of others.
My heart faints.
Until I let go—with the force of a witch’s spell,
I slip the soft-winged shoes you offered on him,
With the implication that they will
Return tomorrow,
They know the way.
To come back.
To return. 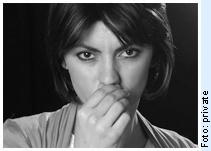