Time does not pass

Baje has become incapable of going down to the fields.
Last year, using a stick, he could reach the yard.
This time he only made it to the porch.
After a three day confinement, Baje passed away.
Boju passed away.

The light passed from her eyes,
From her legs, the strength to stand.
Even her desires were passing,
she passed away herself.

One day, a wild young thing flirted with me
But like a calm lake, I pooled by her side.
Youth was passing from me.

In the yellow autumn, in floe fields
the paddy was passing into haystacks.
The grain had passed and become manure.

But time has not passed
Time is just not there
Time would pass; if it at all existed.

Rajendra Bhandari (born 1956) is a Nepali poet of repute. An Associate Professor of Nepali Language and literature at the Sikkim Government College, Gangtok, he holds a doctorate in Nepali literature from the University of North Bengal. He has published five collections of poetry and has won various awards over the years, including the Diyalo Purashkar in Poetry from the Nepali Sahitya Sammelan, Darjeeling (1981), the Shiva Kumar Rai Memorial Award for poetry from the South Sikkim Sahitya Sammelan (1998) and the Dr Shova Kanti Thegim Memorial Award for poetry from the Shovakanti Memorial Trust, Gangtok (1999). 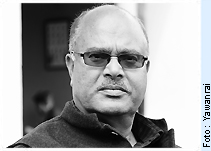 Foto © Yawanrai
Born in Darjeeling and located in Gangtok for thirty years, Bhandari’s poetry has been deeply affected by his social milieu. Unimpressed by “verbal jugglery and over-experimentation in form”, the poetry he values employs an uncluttered cadence, a colloquial diction and a lucid style.