Ann Cotten is a poet, prose author, and translator. She was born in Iowa in 1982 and moved to Vienna in 1987. She studied Germanistics at the University of Vienna and has been living in Berlin since 2006.

Since 2000, her poetry, prose, essays and illustrations have appeared in anthologies and journals such as Die Rampe, Kolik, Zwischen den Zeilen, and Schreibheft. Her first collection of poetry, Fremdwörterbuchsonette (Suhrkamp), came out in 2007. She also published a book on concrete poetry entitled Nach der Welt: Die Listen der Konkreten Poesie und ihre Folgen (Klever Verlag) in 2008; a collection of poetry called Florida-Räume (Suhrkamp) in 2010; and her first full length book of work in English, I, Coleoptile, (Broken Dimanche Press) in collaboration with the artist Kerstin Cmelka came out in 2010. 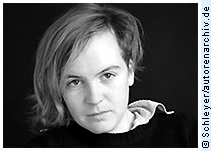 Foto © Susanne Schleyer
Along with Monika Rinck and Sabine Scho, she hosts The Rotten Kinck Schow at irregular intervals.