The death of a poem

We were lots and we didn’t know our names That’s why loneliness was the same for us Nobody bothered to share his thoughts loudly We ate the same food had the same women smoked the same cigarettes We thought about our Father Sometimes we believed that Mom is the death Mom died and we couldn’t understand why is Father still alive If Mom is the death how will Father die? Our life will be pointless if Father doesn’t die

1. When you see a bird flying between the clouds you want it
to be yours. You kill her in order for it to be yours.

Alexandru Vakulovski is a Moldavian poet, prose writer, dramaturg, scenarist, editorialist, critic, and translator. He was born in 1978 in Antoneşti/Ştefan Vodă which then belonged to the Soviet Union.

He studied at the State University of Moldova (Chişinău), and graduated at the Babeş-Bolyai University of Cluj-Napoca with a degree in philology.
He founded the web magazine "Tiuk! (k-avem kef)" in 2001 together with his brother Mihail Vakulovski, the graphic artist Dan Perjovschi, and Viorel Ciama. 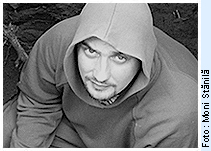 Foto © Moni Stănilă
Between 2003-2005 he worked as a book editor for the publishing houses Aula and Eikon. In 2009-2010 he was chief editor to Stare de urgenţă and Revista la plic, two cultural magazines from Chişinău, founded by ICR.

He published essays, prose, poetry, drama and reviews in a number of important Romanian and Moldavian cultural magazines. His works have been included in anthologies from Romania, the Republic of Moldova as well as internationally. In his work he addresses everyday life in eastern Europe. His language is harsh, crude and provocative. In his texts, he ignores ethical and aesthetic taboos and challenges critics. He is also active as a translator of contemporary Russian literature.

Together with his wife, the Romanian writer Moni Stanila, Alexandru Vakulovski coordinates the literary circle Republica at the National Library in Chisinau.