Had it was the case that all heroes and heroins assessed and weighed for all
his deeds Nobody could withstand such a test
Although we are a little kind to his efforts, a little blind to his faults

If you don’t know Malawi before independence, you will never understand Malawi
under Democracy
If you are ignorant about the history of this nation
You are a citizen without belonging
A stranger in your own country
Since you don’t know where you came from then you don’t know where you are
heading to, with multiplicity of destination in your mind
1
The British were bad Chilembwe was the worse
As German Bismarck army invaded northern nyasa
Mbeya , tikuyu, Kyela were taken, the war was so hot
Bwana mkubwa* Sir Alfred Sharpe hoarsing a dogma as he
was drowning in the floods of terror, “Mayoooh!(shout in cry) Force all fucken Nyasa
men to die for their own territory”.
Then Chilembwe come in uprising
“Africa my people whom you oppress, whom you rob the material foundation of their
culture
They will never ever and ever capitulate to the demands of the villains instead my
people it is very grateful for the success we have in our first attempt to open outer
coats of freedom accessed to all, particularly the stealing of guns from usurpers
climaxing the arresting of this dastard villain an enemy of our vision Jarvis Listone
In the name of Father, Son and the Holy ghost I command cut off the head immediately
His wife, sons and daughters made them our slaves”
2
Tchaka was the great, intruders marvelous as African wanton fighters were set
Armed with guns to kill all indigenous Zulu  Africans armed with spears
Gold was the cause intruders swindlers
Then wise vigorous Tchaka intuitive fighter resist the invasion with Buffalo war
strategy, enemies were down
But intruders rose again with war of facts and reason then Tchaka was defeated
The glare of the mirror flashed and distraught the stature of the king
In shameless lethargy Tchaka signet endorsed then intruders fiddle the land
3
Idi Amin a stocky, repressive and self proclaimed hero as
His Excellence, President for life, Field marshal, Alhagh, lord of all the beast of the
earth and all fishes of the sea, The conqueror of British empire in Africa in general
and Uganda in particular.
In his crude and crippled Englisch remarks before The Highness, I quote him saying,
“Ha haaa hahhhhhh! Extinguished ladies and men at lunch, it is a great pressure to me
to pass my sincere laltitude because it’s a very very cokelistic to be president here.
Madam Queen Sir, I would like to funk you very much for the malicious food you
have given us, to answer your question that why I being the president of Uganda
speaking a broken English like this I hope am speaking a better English other than
American Prime Minister speak in Swahili”

Babangoni wawa Chisale was born on March 24, 1981, in Ntonda Village, T/A Phambala in the Ntcheu District in Malawi.

He discovered the art of poetry while still at school and shortly, after finishing highschool, he produced his first album in vernacular language. In 2003 Chisale decided to adopt poetry as a career and many of his poems have been recited at public events, such as organisational anniversaries and political rallies. Chisale’s poetry and performances make great use of the traditions of the Ngoni culture. 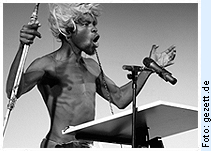 Foto © gezett.de
Chisale was one of the artists performing his poetry at the festival for the 10th anniversary of lyrikline in October 2009.