Emile Berliner, one of the first developers of the gramophone, recorded numerous Arapaho,
Commanche, and Caddo ghost dances, as well as a Paiute gambling song, and published
them in July,1894.

When from the door I saw him coming

The Ghost Dance dates to 1888, when, based on a vision he had during a solar eclipse, the
Paiute mystic Wovoka claimed the earth would soon end, and therefore inherited, especially
through dancing, in which one dies for a minute

Wovoka’s vision of non-violent resistance was shared by Tolstoy: To you can no damage be,
who turns again

And saw that they, in numbers entering

The ghost dances were recorded by the ethnologist James Mooney, who may in some cases
also have played them.

Tolstoy published The Kingdom of God is Within You in 1894, in which the other cheek in
which one sees

the Ghost Dance movement largely died out after Wounded Knee (December 29, 1890) in
which some had believed

the Ghost Dance shirt is impervious to bullets

a rag flies around the sun at specific intervals

Thomas Edison filmed a Sioux ghost dance on September 24, 1894—or more precisely, he
filmed a dance that featured true ghost dance costumes, but the documentation carefully
states that it is not an authentic ghost dance bending as the light will not

and latch you in the glance. The dance, brief and the ghost

Cole Swensen (b. 1955 in Kentfield, USA) divides her time between Iowa, Washington DC and Paris. She works as a writer, translator and editor and teaches Creative Writing at the University of Iowa. Her own press, La Presse, publishes French poetry in English translation.

Cole Swensen's poetry, which, historically speaking, is grouped with Post-Language Poetry, is a reflective, erudite, and at the same time liguistically sensuous art, which draws on both American and French traditions of poetry and art. Her 'serial poems' are sequences of texts with very closely-woven motifs running through them which can deal as much with landscape gardens as with ghost stories. 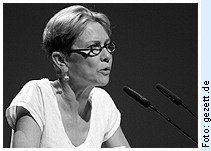 Swensen has published more than ten collections of poetry in the USA to date, which have garnered awards such as the Sun & Moon’s New American Writing Award, the Iowa Poetry Prize, the San Francisco State Poetry Center Book Award, and two Pushcart Prizes. Her collection “Goest” (Alice James Books, 2004) was a finalist for the National Book Award. Her translations from French have also won awards, such as the PEN USA Literary Award for Translation 2004.

Cole Swensen has been called by Library Journal 'one of the most convincing voices in contemporary poetry'.