now represent your representations in the symbolic code of language:
"manatee/ humanity"

& run your hand along a restless spine

how different times give the peculiarities & particulars of people & praxis & place &
thought systems, & become their own "zones" in this

we spoke of lustrations & the architectures of spiritual places, of constructing
mandalas with colored sands & the women who dance on the precipice of
eclipses . . . performance & ritual under arches, pillars that delineate the way
to move as a chorus might, open atriums, they are moving into the augur's space,
the place of frequent animal sacrifice . . .

we're mere sidereal time—two passages of the mean sun time, he cautioned,
& that is relative . . .

both, both, he cautioned further, it's quite unconscionably relative

(that doesn't explain I protested the way we brutalize time)

Poet Anne Waldman has been an active member of the “Outrider” experimental poetry community for over 40 years as writer, sprechstimme performer, professor, editor, magpie scholar, infra-structure and cultural/political activist.

Her published work is prodigious and she has concentrated on the long poem as a cultural intervention with such projects as Marriage :A Sentence, Structure of The World Compared to a Bubble, the recent Manatee/Humanity (Penguin Poets 2009) which is a book-length rhizomic meditation on evolution and endangered species, and the 800 page Iovis Trilogy :“Colors In The Mechanism of Concealment”, published by Coffee House press in 2011. 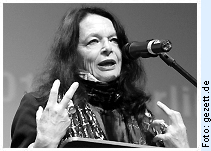 She has also collaborated extensively with a number of artists, musicians, and dancers, most recently artists Pat Steir and Kiki Smith and the theatre director Judith Malina. She has also been working most recently with other media including film and video, with her husband, writer and video/film director Ed Bowes.

Anne Waldman grew up on Macdougal Street in the heart of Greenwich Village where she still lives, and bi-furcated to Boulder, Colorado in 1974 when she co-founded The Jack Kerouac School of Disembodied Poetics with Allen Ginsberg at Naropa University, the first Buddhist inspired school in the West, where she currently serves as Artistic Director of its celebrated Summer Writing program. During their long friendship and work together, Allen Ginsberg called her his “spiritual wife” and she has spiritedly continued their vision of keeping the world safe for poetry (& everything else!).

She published 40 books and chapbooks of poetry and selected poetic texts such as Outrider which includes an interview with Ernesto Cardenal.

She is editor of The Beat Book (Shambhala Publications) and co-editor of The Angel Hair Anthology (Granary Books), Civil Disobediences: Poetics and Politics in Action (Coffee House) and Beats at Naropa (Coffee House, 2009), with previously unpublished work by Allen Ginsberg, Gary Snyder, Diane diPrima, Joanne Kyger and William Burroughs, among others.

Her play RED NOIR played two and a half months on off off Broadway in New York City, in 2009/10. She is the co-author of the script of her husband Ed Bowes’s latest movie “Entanglement”. She also performs with her son. musician and composer Ambrose Bye. Their latest CD is “Matching Half” with Akilah Oliver.

Waldman has worked actively for social change, and has been involved with the Rocky Flats Truth Force and was arrested in the 1970s with Daniel Ellsberg & Allen Ginsberg protesting the site of Rocky Flats which was bringing plutonium onto property 10 miles from Boulder for the manufacture of “triggers” for nuclear warheads.

She has been involved with clean-up issues and also with Poets Against the War, organizing protests in New York and Washington, D.C. , and with the Poetry Is News events, co-curated with poet and translator Ammiel Alcalay.

She took a vow at the Berkeley Poetry Conference in 1965 to devote her life to poetry and artistic “community”. She helped found and direct The Poetry Project at St Mark’s Church In-the-Bowery where she worked as first assistant director and then director a decade. She also recently served on the Board of the Bowery Poetry Club, under the guidance of poet Bob Holman, and Issue Project Room in New York City and is on the Friends Committee for the Poetry Project.

Waldman has been a student of Buddhism a number of years, a cultural activist, and an ambassador for the oral revival of poetry, appearing on stages from Berlin to Caracas , from Mumbai to Beijing. Her poetry has been translated into various languages. She is the co-translator of Songs of the Sons & Daughters of Buddha (Shambhala Publications), from the Buddhist Indian tradition of the Therigata. Her extensive historical literary, art and tape Archive resides at the Hatcher Graduate Library in Ann Arbor, Michigan.