Six years ago, I came here
with a clean face and fresh lungs
looking around, non-stop,
and caused a car to crash into the hillside.
The driver, a local Tibetan, was arrested by the police.
I heard the roar of the river below
and people cried out in the mountains:
What are you here for?
But I didn't have a family then, nor a house,
nor more than ten years of serious study.
How could I answer?
So they made me drink non-stop
and tell a couple of jokes from the interior
but the air was too thin, I stammered
like a stone rolling down the snowy mountain
rolling into the car
and rolling back to Beijing.
There were many circles in Beijing, I was shy,
poor, and my girlfriend was deeply depressed
so I chose to live outside the five rings.
Since then, everything has just happened.
The air is fresh in the neighborhood,
everything's greenified, even people, neighbors
are mostly salt-of-the-earih, no elites,
I watch TV to know what's going on.
These past six years, the country's had its ups and downs.
Has all that development out west come to nothing?
Railroads have brought in more backpackers,
more Sichuan girls on the way.
They're also enraptured, they vomit as well,
dreaming too of their homes rising three thousand meters high,
but they're honest, don't ask questions,
fate and dollar bills are bound together.
Six years gone in a flash.
The very best of them
most likely by now have slept together.

JIANG Tao, born in 1970, initially studied engineering before deciding for literature. Today he is the editor of the journal New Poetry Criticism and Lecturer for Chinese Literature in Beijing and is one of the major voices calling for a renewal in Chinese poetry. His texts are notable for their unexcited language, their wit and their irony. Jiang Tao uses the perspectives of his wide range of poetic personas to criticise various aspects of contemporary Chinese society. His poems are peopled by poverty-stricken pensioners, young emigrant workers and computer nerds, among others. But JIANG Tao does not only complain about social injustices. Instead, he uses ironic refractions to make the absurdity of supposed normality visible. His poems provoke laughter that sticks in the throat. 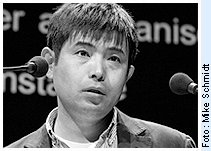 Foto © Mike Schmidt
JIANG Tao has been invited to many international literature festivals and has been awarded prizes including the renowned Liu Li'an Prize for Poetry.