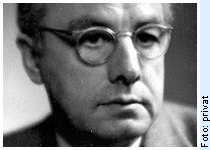 photo © private
Burssens’ initial development as a poet was set against the background of the Flemish Movement. He belonged to the first generation of Flemings able to pursue their secondary education partly in their mother tongue and who, under the influence of a number of inspired teachers, were very conscious of the importance of Dutch as a cultural language. On the eve of the First World War he published some sombre romantic juvenilia, which reveal little of the later recalcitrant poet.