Why don’t you sleep, Marcial, for on this day all licenses
are suspended and no hidden passions burst forth.
Behind those golf courses where you see the gnashing
teeth of the beautiful police three times each night.

To awake and awake sleepless for want of endeavor
your heart, downpour at the edge of the grass
anoints its legs in the salty nakedness of life
bovined, confused cube of garbage, colorful dreams
advertising agency for dying lizards
between dark and vitreous fountains, frozen deserts
and dry clothes shouting from the airport
that the tide has ceased for solitary people, for people
that from this day aspire with strength to growlings of dogs
to dining rooms for mummies, funerals and clerks
raising themselves up with some exhausted pubis on their faces,
clippings of childhood newspaper released from hell,
cobwebs over rounded breasts, breasts
smooth like serifs, full with milk and displaying unpunished
ailing heroes in the white cars of the air.

Why don’t you sleep, Marcial: for your dream will be iodine
to the snow that tinges a night with another night
greater still than Caesar, the division of his
death and diurnal heaven shut off to the heat of the laurel
and of the swollen dew, vast, as if it would never end
as horse’s tongue grazes detached from its palate:
Always thus the candle, somber candle, respectful candle.

Why don’t you go to sleep, hm little Marcial? How much
jetpower does the roman empire need
to hold up your eyelids thus in the mist? hm?:
Retire at once monsters, retire with this year cars
on Central Avenue; disappear and leave alone
the lighted public and the citizens cut down
by agricultural laws and faster stones than the
anxiety of television tapings of old.
Dominion of the guard over astonished fires
over its own reflection in its own hair, over
the heroic distraction of an elephant. Heavier
than the tragic death of adolescents those eyelids.
Heavier than the severe urgency of prodigies
than the electric thirst of immobile civilization
occupied inside with tragic unoccupieds, with its
beautiful and dissolvent park life, cold, midday.

Heavier than the crowns of valiant women who
sobbing over rocks cry out that they will do something great
so that glory may cover their undressed corpses.
(S)he is a martyr: that young virgin of curiosity
an ardent affectation of uncertainty, a house
that crumbles only to be inhabited afterwards, Marcial.

See? behind those golf courses the gnashing
teeth of the beautiful police three times each night.
I don’t want the winter to regress over me like this
so why don’t you just sleep. If soon bodies
do burn for my cause, the fortune will unfold
of the asteroids that shine over the defeated, the fear
exquisite fear, the youth that disappears
in the complete madness of coagulated blood:
You let fall a god in the empty garden to snuff out my
lubricated jealousy by flames of submission.
I’m not an idiot, old love of mine. I’m not an idiot. 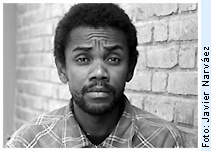