One was tied to a fence post, bawling.
Another was little more than a smudge
left behind by a forehead resting
on a pane of glass. A third
was traumatized, during childhood,
by a water pick, while another formed
a deepening fetish for the rudders
of submarines. One had a bloodshot eye,
one eyelash left, while another poem
was a cell phone, hurled into a toilet.
One poem was arrested for excessive
public prayer; another,
excessive pubic hair. One
fell in love with the word “prong.”
One was a necklace of living bees.
One moved like a grasshopper
trying to outrun a lawnmower.
Another bushwhacked in the nerve-factory.
One spent the entire poem holding,
out of boredom, a socket wrench
up to its eye socket, while another
argued vision is a kind of invisible
suction action. This particular poem was unable
to pull its eyes away from the TV.
This poem had a round, golf-ball-sized hole
in the back of its head. This poem the light
shining, when it sleeps face down, from that hole.

Hawkey’s first collection of poems, The Book of Funnels, was released in 2004; it was followed by Citizen of in 2008. His poetry has been published in various magazines and anthologies in Sweden, Slovenia, Austria, Germany and North America. He and his wife, the German poetess Uljana Wolf, work together in translating each other’s poems into their own mother tongue. 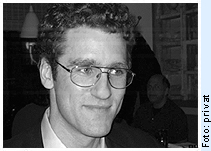