In the end we have dystopias:
visions that arose with the steadiness
of smoke in a still room
but grew too large for cohesion,
preferring dissipation
to the sightless certainty of columns.

We watched. That is all we did:
watched faces as they came in and out of focus;
watched as the angle of our vision widened
to include even what we would never see
in our lifetimes. This is how we begin.

Somewhere in the middle
we lost our way:
we thought of mazes and labyrinths
and brains folded around themselves.
Patterns teased and seduced us.
We believed we had all the time in the world.

Sridala Swami is a poet, essayist and photographer. Her first collection of poems, A Reluctant Survivor (2007), was published by the Sahitya Akademi/ National Academy of Letters. Swami has written four books for children, published by Pratham Books in 2009 and 2012. She was the 2011 Charles Wallace Writer-in-Residence at the University of Stirling, Scotland, and Fellow of the International Writing Program at the University of Iowa, 2013. 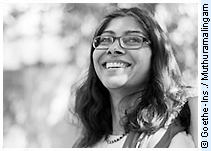 photo © Goethe-Institut / Vivek Muthuramalingam
Swami’s second collection of poetry, Escape Artist, published by the Aleph Book Company (2014), is the first book to appear under the aegis of the Jehangir Sabavala Foundation (JSF). It was shortlisted for the inaugural Khushwant Singh Poetry Prize.

She writes a poetry workshop column in The Daily O called The Sideways Door and blogs at spaniardintheworks.blogspot.com