Since our dawning in the Great Rift Valley
they have been our primordial homunculi,
dog-faced shadows at the edge of our world.

Where we formed a circle
against the snarling cosmos,
they formed their circle outside it, further still.

When we reached out in their direction,
they reached back with long, slender hands,
much stronger than our own.

None of us who ever saw their yawning mouths
failed to regard them as the Lion People.
They faced and fought and feared what we could not know.

Without language, then, without lines,
the carnal baboons held fast –
their families live on under jet-loud skies.

When one of their hearts was fixed inside
an infant girl, in Orwell’s year,
how long do you suppose she survived with their terror?

Paul Vermeersch was born in 1973 in Mississauga, Canada. He lives as a poet in Toronto.

His poems often tackle themes concerning forces that isolate man from his environment and from his fellow man. Childhood memories and scenes from family life provide him with a canvas for much of his work.

Vermeersch is currently teaching creative writing at Sheridan College in Oakville, Ontario, and he is the Poetry Editor for Insomniac Press in Toronto. 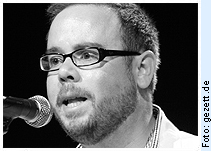