In Europe around the turn of the last century, all upper-class boys were ceremoniously photographed wearing sailor suits. Now flea markets all over the continent overflow with little blue sailors who cannot save themselves. All up and down the diverted and straightened canal, some Romantic had once planted willows. Meanwhile, the lily flower had long since been abstracted into the fleur-de-lys.

To a person, everyone she aimed her camera at would demur, “Oh, I’m really not photogenic.” Which, when she thought more about it, could only mean that everyone thought they were better-looking than they really were. The covert exhibitionists liked to hang out in banks, on subway platforms, and in front of embassies, sneaking glances at surveillance cameras with their sexy gray shoulders.

Das Leben ist kein Wunschkonzert. The rose had already glazed into the rose window. Was it a suitcase or a valise we watched slowly mounting the conveyer belt to be ingested by the belly of the jetplane, was it all just baggage, or was it maybe luggage? On their first date, he joked over a plate of pakoras, “I’ve got so much baggage by now, they no longer let me on airplanes.” There was no second date.

But with you, with you, I wanted to float lazily down the straightened canal under the non-native willows near stocked swans on a raft headed for the longest, lushest, plushest waterfall on record, the one we kept seeing over and over in the movies, and to plunge forever down its endlessly varying sameness. Panoramas of fakeness may have lost their cachet, but what you lost in me was more rarefied still.

When a dance company opened a new performance space in a former soap factory, we were no longer impressed. When the bar owner shouted to us over electronica that here, chocolate had once been made, we yawned. We wished the factories were still factories: we were hungry and dirty, we wanted bars of chocolate and of soap, something to suck on or take home to wash off our wistful, well-earned ennui.

Despite all evidence to the contrary, we took it as a sign of the general psychic health of the populace that they thought they were better-looking than they really were. She collected photographs of boys in blue sailor suits — an ersatz, of course, but for what? The missing photo-graph of herself as a cowgirl? Das Leben ist kein Ponyhof. We all ought to have learned that, oh at the very least that, by now.

Donna Stonecipher grew up in Seattle and Teheran. She is the author of four books of poetry, most recently Model City (2015). Her third book, The Cosmopolitan, won the 2007 National Poetry Series. Stonecipher has been the recipient of numerous grants and fellowships, including residencies at Yaddo and Djerassi. Her poems have been published in many journals, including The Paris Review, and both Model City and The Cosmopolitan were translated into Spanish. Her prose book Prose Poetry and the City is forthcoming in 2018. She translates from French and German, and is currently working on a translation of Friederike Mayröcker’s études, for which she won a 2015 Translation Grant from the National Endowment for the Arts.
Donna Stonecipher lives in Berlin, where she works as a writer and translator. 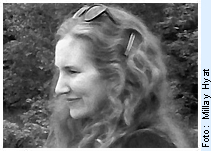