Yellow-legs ekes lower at nightfall to a stick nest
brambled in the shade-kill, doing for himself, deft

as a badger in a hammock. Mornings, toeing wracked heights
of the cottonwood, he flaps his brown flag above alkaline

slough beds, over plowlands attesting
to the back and forth of work, their brown degrees

in relief. In relief at the topmost, he mimics domestic, migrant,
spaniel, spring peepers, quacks, urks, and gurgles akin

to a four-stroke in heavy water. He’s slightly

off. None respond. His own call is the vinyl scratch
between tracks, a splice point. He was hatched

that way, ferruginous, a wet transistor
clacking from the egg in which he had lain curled

as an ear with an itch inside. He carries on
like AM radio. Like a prison rodeo. Recounts loser

baseball teams, jerry-riggers, part-timers, those paid in scrip,
anyone who has come out of retirement once

too often. He is playbacks, do-overs, repeats, repeats
the world’s clamorous list, makes it his, replete,

and fledges from persistence what he is. 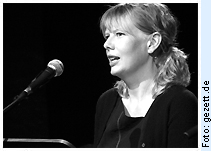