Purportedly a chain of civilians, soldiers, voices
lice they were called. It is sometimes sufficient to beg
Lice creeping over one, kill them with a chemical;
then there are lice-ghosts everywhere. Glints of pearly
nails. The light of my beloved will keep me from noticing.
Trailer to keep her in; he asked me if I knew her 'auction name.'
Walked over the scorch; what are values when there's nothing here?
The wing of a dead soul grows into all the lace you see through,
foreigner, lice-ridden article of divestment. Splendid vices
pouring outcomes over the eager cash flow promotions.
So many of the dead carne to me that their transparencies
covered my visage, l'm too near you. Dont you want to see!
We came from faraway camps, forsaking the human because it
broke our bodies into pieces for the torturer's pet, who
propositions you. There is always a slant on it. The trees must
go down; or light affects your eyes badly. We pleaded for an
adjustment, before we'd recognizably died. You
told me you were a heart, but you were guarding a tower. You
said you were a failure, but you helped destroy us.
Wings all over me, stuck to my skin, there's no point to it
why are you here when there's nothing? We just dont believe it.

Now not no never you. I wasn't you. You have to talk to me
my name is irretrievable. No one letting you go because you
are prized for not existing except as a body, now not.
No I dont exist, alighting and ghoulishly begging you for a
drop of your blood, a morsel of your flesh. Yes take some of
me, though there are so many others with flesh. But they're too
rich to give. I know they will never let you in, you beautiful
kids who haunt the corridors extending through
the invisible world, so you can find your way. So you can see
past the smoke of disastrous fear acting out of dreams:

it creeps everywhere. See how it took them over, for
they had no mind to stand against any fantasy the instigators
chose. Had no minds at all. When I was little, no one told
me l'd have to suffer. Who can be a child? And the ghoul
patiently explains how the wing of a word can extend till the
barrier is made, so they can't see us. If you say beauty, that
will be ignored, and we can hide. It was his name a long time ago,
before the auctions began. Her face then was large and younger.
She can be lice or ghoul. I want that, I don't want action. But I
will have to live off bits of you.

The new definition of witch is one who lets them eat you, if
they have to. Because you keep regenerating. Oh that's such an oldy,
and all that flying. Sometimes they do—the man who showed me a
few things sits all day. The teaching is to let them come as far as
inside you even, empty enough; I can hear them and render affection
Why, if there's nothing? Is this nothing? But you are destroyed
We shake all the time. You remind me of someone else I knew.
The wing is inscribed, for involute. Not to beg in the offering
of primal services, we have come here. No one would let us tell
anything but our bodily humiliations; had to do differently, not for
redemption, because we are more than redemption. I am my maker.
The shape formed by the bits of mirror glued on is unimportant.
They're inside my chest and stomach, and they glitter in there.
Then if light disattaches, comes up to be spoken, you
can see and you can hear. This is true because each of you has this
too. Has all the bright pieces inside: there was nothing else
left to be. Then I say it, like these pages, or how they would
love me for hosting them. The earliest people feared them,
and subsequent ones deny the dead. Why would I be afraid of
all the people dead and martyred? I thought you were talking
about words. You knew I wasn't.

Dido who had to be delivered from the wrong story:
I want you to know l'm no longer left over. What about our
library, nothing good left there? I want to read the fashion of when you
were old a long time ago. Gothic roses in the type; l'm an ancient
Had read every the book of before they arrested me.
I had crossed the black plain, I had held tears it was abrupt
to be walked in a herd pushing us, wherever we went to be shot, or
executed in the earlier style. It is a timeless death placed next to the
most beat-up books. Only a book can love me now. We re reading
without real eyes; I've read everything too, or in the tradition of
telling it is repeated within you what we did. We must have
been trying to make something as we are now, but why. You
have the ear for it. The light wants you to reply, asking if a
shore had been attained or if the language were Dutch or Swahili
I didn't know. It is how you raised the ground, like raising a child
every word that comes out of my mouth torn l'm responsible to
The wind foul pieces here tries to turn me from tenderness, the way
they killed us in the center of the city, that night. The bodies
floated in the river while I looked for other souls and saw my face
water damaged a new texture and how can I see? Potential
returning within its white petals and central whorl.

He couldn't believe someone would hate and betray. I
told him, but he refused to believe it; then I left the room.
This lace has to be made. Treason said the ghoul that
peculiar invention betrayal, how primal was that?
In Hesiod after the light, after chaos and lover. Said the armless
woman, said the one cut open, said the smallpoxed
the strewn children their bodies woven into the page
so I could find what they thought, even if babies only cry.
Those are the bodies when I was no longer alive but uplifted
butterfly of lace with an empty length to bifurcate my symmetry.
No I don't believe the lies of the live. I am a spot of light in
order to find out, hanging on because it wasn't revealed in
death. I know what happened to me, she said; bleeding I

lay there unblessed. Do I want a blessing now, or a god to
rebuild me? We have gone beyond god or new lives, or death, or
tribes. I am working on this lace light at present; I accept the
drop of sacrificial blood to propitiate me. One piece of you at a time
is all I need. I am letting you feed, I say, because I know this has
always been. You've been telling me for years
We needed you, if no one else did. We have this project to
change our silence into the beautiful city of a voice.

Alice Notley has published over thirty books of poetry, including (most recently) Culture of One and Songs and Stories of the Ghouls, and the chapbook Secret I D.  With her sons Anselm and Edmund Berrigan, she edited both The Collected Poems of Ted Berrigan and The Selected Poems of Ted Berrigan.  Notley has received many awards including the Academy of American Poets’ Lenore Marshall Prize, the Poetry Society of America’s Shelley Award, the Griffin Prize, two NEA Grants, and the Los Angeles Times Book Award for Poetry. She lives and writes in Paris, France. 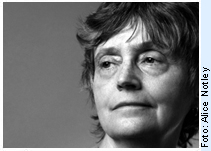