Smuggled across the fierce chasm
between us and the US, and then

hidden, stuffed between Farsi
and Science textbooks in my school

bag, the illegal and sacrilegious
cassette-tape of Thriller, ready for

revelation to the sheepish, ignorant
kids on the bus to my primary school

in war-stricken Tehran. My plan:
to expose the forbidden thing, exhibit

my courage, rebelliousness, etc. Autumn
of ’83, desperate for attention/approval

from the other kids. My copy of
dangerous Western ‘art’ would

unsettle the boring, Islamic world
of my classmates – and elevate my

cowardly, chubby, unpopular
self. I whispered to the kid next to me

if he had ever heard of  ‘Billie Jean’
and ‘Beat It’; if he knew anything at all

about the number one famous
star of our wicked enemy. “I love

Thriller! Aren’t the zombies so scary
in the music video! They’re so ugly!” His

boisterous words echoed. The bus
vibrated with the singer’s name. Another

shouted he had a Thriller poster, and
another, a ‘Billie Jean’ T-shirt, a gift from

Turkey. Silenced, robbed of my planned
stardom, I sank in my seat; later threw out my

Ali Alizadeh is a Melbourne-based writer whose books include Transactions, Ashes in the Air and Iran: My Grandfather. His work has been described as 'masterful', 'infuriating', 'monstrously clever' and 'beautifully twisted'. He's lived and worked in China, Iran, Turkey, UAE and is now a lecturer in literary studies and creative writing at Monash University. His poetry has been the subject of programs on ABC TV and ABC Radio National, and he was shortlisted for the Australian Prime Minister's Literary Award in 2012. In 2013 his latest work of fiction was longlisted for the Frank O'Conner Short Story Award. He was born in Iran and migrated to Australia as a teenager. He has worked as a delivery driver, street performer, kitchen hand, proofreader and hair-wrapper, and is currently working on a novel about Jeanne d'Arc. He's an editor with Vlak and has a website:  http://alializadeh.wordpress.com/ 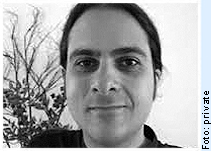