On a cold, early November night,
Mimmo, Martino, and I climbed to the top
of the Norman rock tower of Castelmezzano.
In the green lips of the trees
the Dolomite mountain peaks of Basilicata ,
big, broken, splintered teeth spiked into the sky,
and a thin cresent moon.
Bright beams of white light from the lumiere show
turned on by the Mayor especially for us,
gloriously illuminated the mountainsides.
Fog blew in from the blackness,
clouds rolled in below
and swirled around us,
and exposed briefly by a beam of light,
fled quickly, slipped back into the pitch black,
stumbled up and danced down the stone slopes,
and rushed in to touch, embrace and welcome us.

Hidden inside the fog and mists
were witches,
each a secret to herself,
the white witch with the curved knife and the bella figura,
the red witch made of ruby with a voluptuous body,
the blue witch with an owl face rode a donkey with three legs,
the yellow witch wore a ball gown of gold brocade
and held a mongoose vomiting jewels,
and the green witch with a hawk face rode a camel
and scorpions came from her fingertips,
and the beautiful witch with a smiling face
held a lamp of the sun and moon,
the witches of fog ate the witches of snow,
and witches dressed in black rode white dogs,
and danced, flew, chased, glided, and leaped over,
and long dives from life to death,
and witches who were rotting in hell
swarmed, screeching with joy.
They were happy to see us.

The witch Santa Meurte was a skeleton
with a grim-reaper sickle and a blood curdling grin.
She usually wore black,
but occasionally liked feather  boas and sequin gowns,
and big fake jewels and necklaces,
and rings on each bone finger.
She chain smoked cigarettes and joints,
drank whiskey straight, and snorted drugs.
She had no flesh, but loved sex and bliss.
She danced exquisitely the criminal tango.
Santa Meurte answered the prayers of the poorest
and most outcast,
people in trouble adored her,
whores and drug dealers,
car thieves, burglars, and con-artists sought her protection,
people prayed for the miracle of money for food,
and the lost and abandoned,
every single one who asked her help, she helped.
Santa Meurte was the wish-fulfilling witch.

The witch of poetry was Sarasvati
and her sister Laxmi was the witch of wealth.
When Sarasvati wrote great poems
and sang beautiful songs
and filled the world with music and wisdom,
and became famous and adored
for her brilliance, beauty, and compassion,
her sister Laxmi got very jealous, and angry,
and did the most terrible things.
She stole the cash and property,
lied, invented false gossip,
had her excluded,
and had the lawyers sue
blocking everything from happening;
she punished her for her success,
sweet revenge.
That is why poets never have money.
Poets are poor sisters,
with great clarity and great bliss.

Mimmo, Martino and I climbed back down the rocky mountain path,
as if feathers were under our feet,
and we walked down below the clouds,
on steps cut in the rock toward the medieval stone houses
that clung to the edge of the mountain peaks;
and thousands of modulating waves of sweet sound
sang in silence.

John Giorno, born in New York in 1936, was a highly innovative and influential figure; with a career spanning over 50 years, he is often considered to be one of the originators of Performance Poetry.

A key figure in the Factory art scene, John Giorno was a friend and contemporary of many of the most significant 1960s writers and artists, including Ginsberg, Rauschenberg and Jasper Johns, and was the subject of Andy Warhol’s experimental 1963 film Sleep. 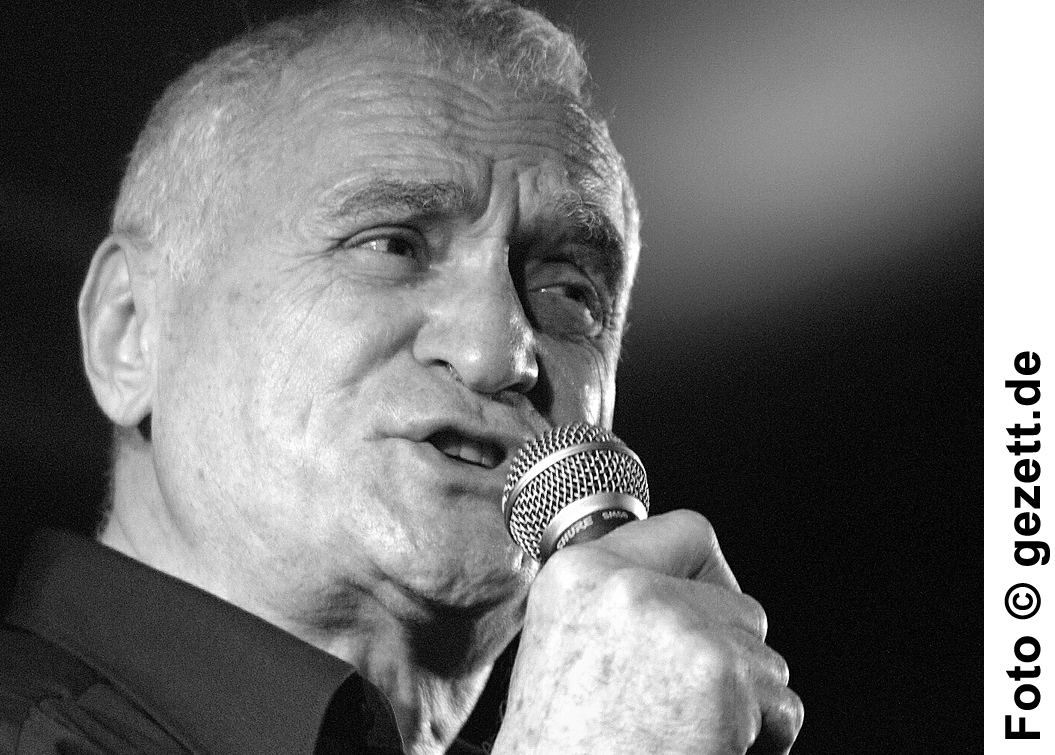 photo © gezett.de
In 1965 he founded the artist collective and record label Giorno Poetry Systems, which pioneered multimedia poetry, releasing over forty poetry LPs and CDs, as well as videos of live performances, by artists such as William Burroughs, John Ashbery, Patti Smith, Philip Glass and Laurie Anderson. Giorno also initiated the 1968 communication experiment Dial-A-Poem, which allowed callers to dial a number and listen to a recording of a live poetry performance. These innovative uses of modern technology brought poetry to new audiences, and were influential on later poetic movements, such as Spoken Word and Slam Poetry.

Giorno was also a pioneering Aids campaigner, and om 1984 founded the Aids Treatment Project, an organization which was effective in raising the public’s awareness of Aids long before it became an issue often addressed in public.