From January to April 2012, poets from all 27 countries of the European Union and the accession country Croatia wrote a chain poem or, as we call it, Renshi to Europe, for the Berlin Poetry Festival. In this format, the last line of each poem became the first of the next, thus connecting each poet to his/her predecessor. There were five groups with six to seven poets in each, creating five side-by-side chain poems by authors with 23 different native languages. All of the poems were translated into English and German.

The 28 authors involved in the renshi.eu experiment did not focus solely on the politics of the European crisis or the everyday problems of the people, but also the bigger picture, poetically examining the figures and myths of the European idea.

Greece, as both the focus of the economic crisis and the birthplace of European culture and democracy, was the jumping off point for this Renshi. The Greek poet Yannis Stiggas’s poem was used as the starting point and basis for all five groups.  At the end, he also wrote a final verse that reflected on the extant traces of his own lines in the writing of the other authors.

The premier of renshi.eu took place on June 2nd, 2012 at the Akademie der
Künste (Academy of Arts) in Berlin.

renshi.eu is a production of the Berlin Poetry Festival 2012, under the patronage of the European Parliament, sponsored by the German Foreign Office, in cooperation with Literature Across Frontiers and the Education and Culture Directorate General of the European Commission, EUNIC Berlin and lyrikline.org.
Project coordinators: Alexander Gumz and Juliane Otto

This project was organized by Literaturwerkstatt Berlin and their international partners, many of which belong to the lyrikline.org partner network:

With the kind support of: 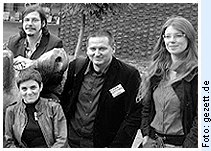 Josep Pedrals (born 1979 in Barcelona, Catalonia/Spain) is a poet and musician. Before he started performing his poems on stage in 1997, he had been working as a bookseller. A sound poet, he had his first commission on the radio as a filler, providing charming nonsense rhymes to order. Josep Pedrals writes humorous verse which constantly shifts between quiet, sensuous and expressive passages. His performances are somewhere between Dada and jam sessions. In 2009 he was the winner of the Osaka Poetry Slam, organised by the Osake Goethe Institute. Until 2004 he played keyboards for the band Explosion Bikini. At the moment he is the leader of the ironic pop group Els Nens Eutròfics, in which he is the vocalist and songwriter and plays clarinet. He also writes stage plays and gives poetry curses for adults and children.

Edward O'Dwyer (born 1984 in Limerick, Ireland) is a poet and is stusying communication science. His poetry has been published mainly in literary magazines and anthologies in Ireland, the UK, North America and Australia. His first collection, Oboe, was published in 2007, with his second, A Love Poem Mostly For You due this year. His poem ‘Only by Chance’ was nominated for the 2012 Hennessy Literary Award.

Sotos Stavrakis (born 1973 in Nicosia, Cyprus) is a trained actor who in 2012 completed a theatre directors’ course in London. Since then he has been working on various theatre and film productions in Cyprus and Greece. Together with his wife, artist Lia Boyatzi, he opened the art space Kat`oikon in Nicosia, where regular exhibitions, performances and other cultural events take place. His first collection of verse, Anaporeia, was published in 2003. Sotos Stavrakis has also translated the one-act play Blackbird by David Harrower into Greek and put it on in his home country in 2010. Stavrakis also works as a dubbing actor for television.

Agnieszka Wolny-Hamkało (born 1979 in Wrocław, Poland) has published two collections of short stories and six books of verse. She works as a television journalist, presenting a cultural programme in which new books are presented. Wolny-Hamkało not infrequently turns into a performance artist when presenting her own texts, using her whole body to reinforce the expression in her poems or playing vibraphone to enhance her verse. When she is not on the stage, she teaches creative writing and writes children’s books. Agnieszka Wolny-Hamkało has a degree in Cultural Studies and is an acknowledged expert on multi-media and feminist art.

Christoph Szalay (born 1987 in Graz, Austria) first attracted attention as a professional sportsman in the Nordic combined event in Austria. In 2007 he swapped his career as a skiier for a degree in German Studies in Graz. The 25-year-old lives and writes there and in his house in the Ennstal. He attracted public attention with his first book of poems, stadt / land / fluss, which was published by Leykam in 2009, and in which Christoph Szalay manages the balancing act between reflective urban and nature poetry on the one hand and playfully ironic procedures on the other. It brought his the literary promotion prize of the City of Graz and, in 2011, a START fellowship from the Austrian Culture Ministry.