The Divine Comedy, its crane beak glistening, the rusted

unpacking a picnic, unfolds a cloth of itself, a map, fifteen feet

under him in kneading air over black rock, its pumping landing lights

passing through steam clouds from vents, and turning on it musically,

on the turntable of the book,

the valley and seventeen inch neck farm of the Summa Theologica,

and the Summa again, eighty pounds of eyes in a square lit like

a wrestling ring, the eggwhites castle of Aristoteleanism, which, un-

crossing its arms, monstrances itself as a reed boat smoothing through crow-

on a red leather Hausa cushion.

And Proclus, hidden in alders, in his cat voice, hems this into the skin,

where its eye-gold is chewed and the night man’s

body turns into a field of the poem’s shivering, afterlife wheat

and this is politics too, and the true right-armed city grows

and he smells the wool-sock-drying-on-a-radiator smell

of the mountain around him. 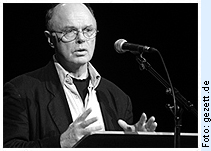