I am somebody else and she made me blind.
I don’t quite know how I might be different. More clear-sighted, less purblinded,
that the image in the widening eye of the new-born not be so obscure.
In ’89 our fathers scraped off the moulting snakeskin of the ancient regime,
like the factory grease from the bodies of their Soviet cars. The old railway depot,
where they performed their rituals, has been demolished. In its place
the teeming Westend supermall, dark windows glinting with crisis, a solid monolith,
where no light enters, and the outlooks got no brighter,
in vain the many saviours, stiff-necked philosophers, beguiling mannequins,
rabble rousing football stars. During the Gulf War taxi drivers called me Schwarzkopf.
They protested for cheaper gasoline as I broke through their ring of commi era cars,
wearing an ugly soldier’s jacket,  to get to the store by the woods,
where you could get the bitter, magic elixir that Tiresias’ breasts never before had yielded.
On the rough ground my shoddy bike tossed me off, I began to drift
down the haphazard stream, where the leeches were organizing a bloodsuckers’ ball
while cancer spread like wild mulberry across Europe’s darkened face.
She waited, smiling, for the familiar scalpel, miracle-working doctors
from faraway lands, that she might see the promises of the new millennia, her progeny,
grow up, who had not been sacrificed, after the air-raid sirens had fallen silent,
and emerging from the depths of the cellar, she threw first the guns
carved of broken chair-legs, then the ragdolls, made-up with coal, one by one
at the sneering face of the winter sun. 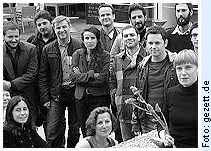 Tom Reisen (born 1971 in Luxembourg, Luxembourg) studied Romance Studies at the University of Caen, where he then took his doctorate in 2001 after a research residence in Paris. From 2004 to 2008 he edited the Tageblatt, Luxembourg’s second-biggest daily newspaper, which is published in German and French, from 2006 as its deputy editor-in-chief. He now works for the Luxembourg Foreign Ministry. Tom Reisen’s first book of verse, Dialogue des limbes, includes poems written between 1987 and 1992. In 2000 this won him the special jury prize in the Concours Littéraire National. His poems deal with childhood memories and literary motifs from French modernism. Reisen also publishes scholarly articles and articles on French literature and Luxembourg cultural life. His field of research is André Gide and the group of writers in the Nouvelle revue française.

Luigi Nacci (born 1978 in Trieste, Italy) is a poet and performer and has published five books of verse in the past few years. He works as a journalist, performs at poetry slams and readings and organises various festivals. He is involved with cultural events in his home city of Trieste, organises the annual Absolute Poetry Festival in Monfalcone and is co-organiser of the Viandanza Festival in Tuscany. He writes on his blog www.nacciluigi.wordpress.com with the title Poetry, walks and other little things about his love of walking, about events and experiences, and published samples of his poems, some with English and German translations.

Maarja Kangro (born 1973 in Tallinn, Estonia) lives in Tallinn, where she was born, and works as a writer, translator and literary critic. Her publications include four volumes of verse, short stories and a children’s book and she has written opera libretti and texts for cantatas. In 2009 she was awarded the Estonian Cultural Endowment`s Literary Award for poetry and the same prize for prose in 2011, thus becoming the youngest person to win in both categories. Her poetry is ironic and surprising, and she is able to draw a perfect image thus making bizarre phenomena appear unexpectedly familiar. Maarja Kangro also translates poetry (Ernst Jandl, Bertolt Brecht and Hans Magnus Enzensberger), philosophical texts (Umberto Eco) and prose. In 2003 she won first prize in the Società Dante Alighieri competition for translating Italian poetry.

Jenny Tunedal (born 1973 in Malmö, Sweden) lives in the countryside outside Stockholm and works as a poet and literary critic. She studied Englaish and Comparative Literature in Lund and attended courses in journalism in Dublin. Since 2007 she has been the literary editor of thze Swedish daily newspaper Aftonbladet. From 2004 to 2006 she was editor-in-chief of Lyrikvännen, Sweden’s oldest poetry magazine. She was awarded the Prins Eugens Culture Prize in 2005 for her work as a poet, critic and editor. She is interested in international poetry, especially American. She has translated poems by Emily Dickinson, Sylvia Plath and Claudia Rankine.

Zoltán Tolvaj (born 1978 in Budapest, Hungary) spent his first few years in Brazil then grew up in Transylvania and Hungary. Since 1998 he has been writing poems, essays and short stories which have been published in many Hungarian literary magazines . He has published two collections of verse. Zoltán Tolvaj studied astrology and Hungarian and Portuguese language and literature, has worked in hostels and as a bar musician and was from 2003 to 2008 the online editor of a Hungarian literature portal. In 2010 he received the Móricz Zsigmond fellowship for young Hungarian writers. He also works as a translator from Brazilian, Portuguese and Galician and has won various literary prizes for his translations, including the Junior Parnassus Prize of the city of Eger.

Filipa Leal (born 1979 in Porto, Portugal) studied journalism in London and Brazilian and Portuguese literature in Porto. Since then she has worked as a poet and journalist in Portugal. She published four books of verse between 2004 and 2009. Her poems are natural and uncontrived, describing apparently everyday things such as trees, houses, books and words, light and shade, days and nights. Fellow Portuguese poet Jorge Sousa Braga has said of her verse, “Filipa Leal constructs her poems as carefully as spiders’ webs, and her readers fall into them like flies.”