What was the point of it? The stoned
life, the chased, snorted, shot life. Some low
comedy with a cast of strangers. Time
squashed flat. The 1001 names of heroin
chewed like language. Nothing now to know
or remember but the dirty taste

of it, and the names: snuff, Death, a little taste,
H—pronounce it etch—, sugar, brownstone,
scag, the SHIT, ghoda gaadi, #4 china, You-Know,
garad, god, the gear, junk, monkey blow,
the law, the habit, material, cheez, heroin.
The point? It was the wasted time,

which comes back lovely sometimes,
a ghost sense say, say that hard ache taste
back in your throat, the warm heroin
drip, the hit, the rush, the whack, the stone.
You want it now, the way it lays you low,
flattens everything you know

to a thin white line. I’m saying, I know
the pull of it: the skull rings time
so beautiful, so low
you barely hear it. Itch this blind toad taste.
When you said, “I mean it, we live like stones,”
you broke something in me only heroin

could fix. The thick sweet amaze of heroin,
helpless its love, its know-
ledge of the infinite. Why push the stone
back up the hill? Why not leave it with the time-
keep, asleep at the bar? Try a little taste
of something sweet that a sweet child will adore, low

in the hips where the aches all go. Allow
me in this one time and I’ll give you heroin,
just a taste
to replace the useless stuff you know.
Some say it comes back, the time,
to punish you with the time you killed, leave you stone

sober, unknowing, the happiness chemical blown
from your system, unable to taste the word heroin
without wanting its stone one last time.

Jeet Thayil was born in Mamalasserie, Kerala, and educated in Bombay, Hongkong and New York. His four poetry collections include English and These
Errors Are Correct, which won the 2013 Sahitya Akademi Award for poetry. He is the editor of The Bloodaxe Book of Contemporary Indian Poets and is a visiting professor of poetry at the University of Goa. As a musician and songwriter, he is one half of the contemporary music project Sridhar/Thayil. His Delhi-based band is Still Dirty. Jeet Thayil’s novel Narcopolis won the 2012 DSC Prize for South Asian
Literature, and was shortlisted for five other prizes, including the Man Booker prize, the Man Asian Literature Prize and the Commonwealth Prize. 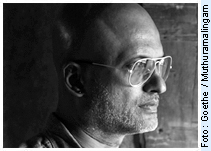