Edina, Muse on stately dome
Friend to strangers, to bards a home
Formed of curving seams and nodules
Stratified with values social
Crowned with crags of steadfast lives
With writers lost whose fame survives

Edina, buoyed by Arthur’s strength
Commanding awe and natural sense
Scanning waters of the North
Surveying isles amidst the Forth
Girded by mighty span of steel
Enriched by strands of commonweal*

Edina, with sovereign power reclaimed
Fairness, good faith impart your name
Embrace a multitude of views
Imbue your bairns with love of truth
Edina, arise from your bowed state
Dawn beckons your righteousness, your grace!

Joanne Maria McNally was born in the UK.

Since graduating from King's College London (1987), Joanne Maria McNally has spent extended periods of time in Berlin. Much of her poetry, fiction and historical work has been inspired by her association with the city and with Germany, as f. e. her poetic novella Hell Unlimited. Where Shakespeare met Goethe. The topic of her PhD (part published as a book in 2000) equally displays her relationship with Germany and its cultural history and investigates linguistic and cultural play. 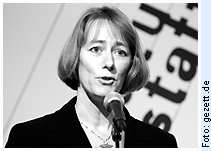 She has initiated and developed a series of creative and intercultural projects, including a 'Century of German Cabaret' with the Academy of Arts Berlin (2001). Joanne has subsequently developed the idea for a 'Cabaret Forum' (an arts-based foundation bringing together poets, musicians, painters and satirists with a performance, educational and 'master class' focus).