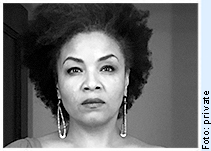 photo © private
Even before the publication of her book TwERK gained so much attention, LaTasha N. Nevada Diggs had already made a name for herself with numerous chapbooks including Ichi-Ban, Ni-Ban and Manuel is destroying my bathroom. She has also released the album Televisión.